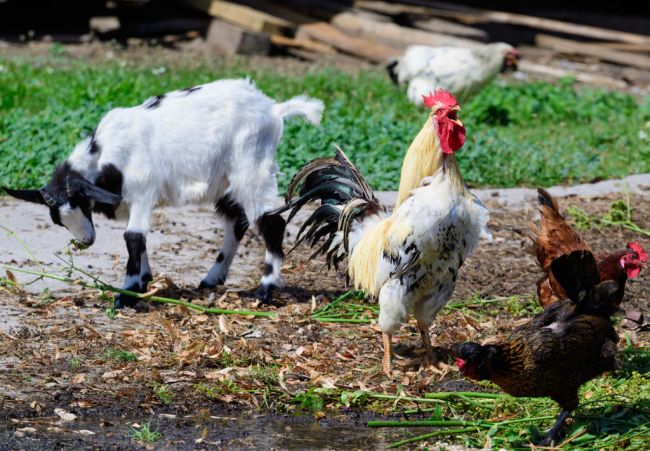 When it comes to farm animals, I like to imagine it’s like Charlotte’s Web. All of the animals on the farm are friends and they can communicate with one another about anything from politics to what’s for dinner.

In this case, on a quaint little farm somewhere in the ‘burbs, the gang teamed up to take down a vicious hawk.

The hawk flying in from the right side of the screen, targets a solo chicken that seemed to have forgotten about herd mentality. The chicken gets away at first with a nasty juke move, but runs directly into the fence with nowhere to go.

With its prey cornered, the hawk circles back and gets ahold of the chicken.

In a heroic effort, a charging rooster is first to the scene, trying to save his friend. Despite a clear disadvantage, the rooster goes full-force with its beak, but can’t manage to get the hawk away.

At that point, in comes Gerry the goat. The goat comes charging in horns-first and proceeds to stomp all over the hawk, until it eventually lets go of the chicken and flies off.

The chicken scampers into its lovely farm home chicken coop and gets away safely. Every individual effort from those involved in getting their friend free is impressive— except the white goat in the back that hides under the ladder/bridge contraption.

The swans and ducks in the back right corner are forgiven, because they don’t want to be the victim, but that one cowardly goat is out of the social club.