Answering The Call (Her Daddy Subreddit): My Boyfriend Followed An Instagram Model 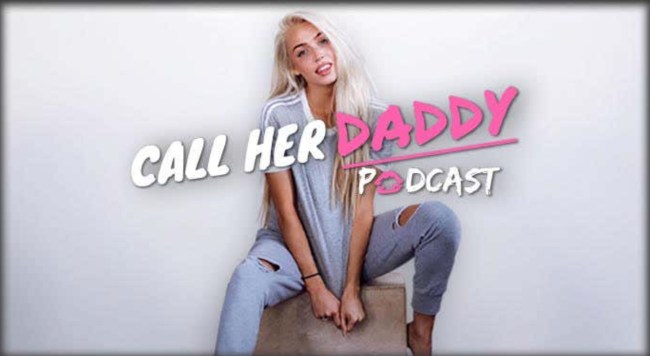 Last week, I dove into the Call Her Daddy subreddit. Within its turbulent waters, you’ll find the occasional plea for advice on a fan’s personal dating issue. These are the treasures I seek, and this week we’ve got a doozy that centers around the age-old problem of a boyfriend following Instagram thots. For the full thread with responses, click here. Otherwise come on in, the water’s fine: 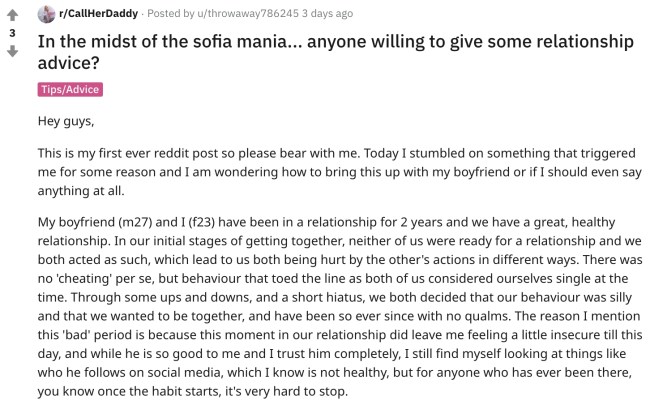 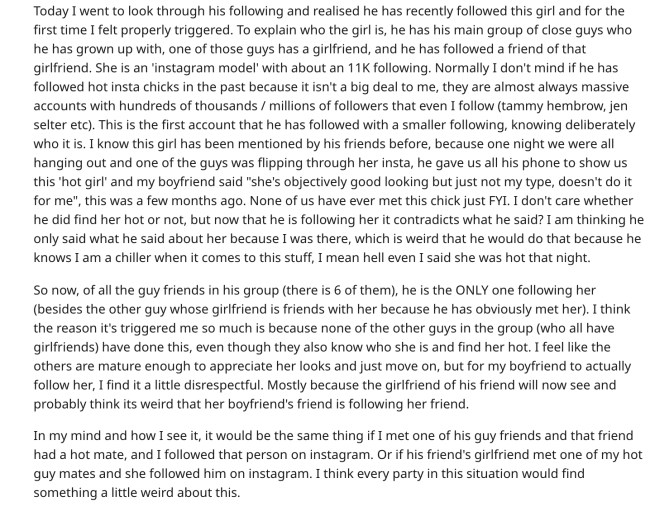 This is my first ever reddit post so please bear with me. Today I stumbled on something that triggered me for some reason and I am wondering how to bring this up with my boyfriend or if I should even say anything at all.

My boyfriend (m27) and I (f23) have been in a relationship for 2 years and we have a great, healthy relationship. In our initial stages of getting together, neither of us were ready for a relationship and we both acted as such, which lead to us both being hurt by the other’s actions in different ways. There was no ‘cheating’ per se, but behaviour that toed the line as both of us considered ourselves single at the time. Through some ups and downs, and a short hiatus, we both decided that our behaviour was silly and that we wanted to be together, and have been so ever since with no qualms. The reason I mention this ‘bad’ period is because this moment in our relationship did leave me feeling a little insecure till this day, and while he is so good to me and I trust him completely, I still find myself looking at things like who he follows on social media, which I know is not healthy, but for anyone who has ever been there, you know once the habit starts, it’s very hard to stop.

Today I went to look through his following and realised he has recently followed this girl and for the first time I felt properly triggered. To explain who the girl is, he has his main group of close guys who he has grown up with, one of those guys has a girlfriend, and he has followed a friend of that girlfriend. She is an ‘instagram model’ with about an 11K following. Normally I don’t mind if he has followed hot insta chicks in the past because it isn’t a big deal to me, they are almost always massive accounts with hundreds of thousands / millions of followers that even I follow (tammy hembrow, jen selter etc). This is the first account that he has followed with a smaller following, knowing deliberately who it is. I know this girl has been mentioned by his friends before, because one night we were all hanging out and one of the guys was flipping through her insta, he gave us all his phone to show us this ‘hot girl’ and my boyfriend said “she’s objectively good looking but just not my type, doesn’t do it for me”, this was a few months ago. None of us have ever met this chick just FYI. I don’t care whether he did find her hot or not, but now that he is following her it contradicts what he said? I am thinking he only said what he said about her because I was there, which is weird that he would do that because he knows I am a chiller when it comes to this stuff, I mean hell even I said she was hot that night.

So now, of all the guy friends in his group (there is 6 of them), he is the ONLY one following her (besides the other guy whose girlfriend is friends with her because he has obviously met her). I think the reason it’s triggered me so much is because none of the other guys in the group (who all have girlfriends) have done this, even though they also know who she is and find her hot. I feel like the others are mature enough to appreciate her looks and just move on, but for my boyfriend to actually follow her, I find it a little disrespectful. Mostly because the girlfriend of his friend will now see and probably think its weird that her boyfriend’s friend is following her friend.

In my mind and how I see it, it would be the same thing if I met one of his guy friends and that friend had a hot mate, and I followed that person on instagram. Or if his friend’s girlfriend met one of my hot guy mates and she followed him on instagram. I think every party in this situation would find something a little weird about this.

So daddy gang, is this even worth bringing up? I do feel hurt by it but I don’t want to come off as insecure, I think my reasoning is plausible and while I can appreciate some people are really nice to look at, I think there is a line to draw, and following your mate’s girlfriend’s hot friends kind of crosses it for me. Just a side note that I am due for my period so I am much more emotional now than usual. I have thought about how I will bring it up, if it is suggested I should, and I won’t do it in an aggressive way, I was just going to present my analogies above and ask him if he would think its okay if I did something similar? What do you guys think? Any advice would be greatly appreciated, thank you so much and sorry for the rant xx

They say that if you go looking for something fishy, you’re going to find something. Our troubled advice-seeker went hunting and found that her 27-year-old boyfriend was following an 11k-follower Instagram “model.”

[He said] “She’s objectively good looking but just not my type, doesn’t do it for me”… I am thinking he only said what he said about her because I was there.

Nooo, surely that can’t be true. Knowing him as I do, if he were alone with his buddies, packing lips and playing Call of Duty and drinking orange gatorades, and someone passed around photos of a hot babe emerging from a pool with her underboob bulging like a herniated disc, he would stand up, face the nearest American flag, and stoically declare: “WHILST I RECOGNIZE HER OBJECTIVE ATTRACTIVENESS, SHE DOES NOT ADHERE TO MY SELECTED CRITERIA FOR AN IDEAL MATE. AND THUS, I OBSERVE THIS YOUNG WOMAN WITH TOTAL INDIFFERENCE. GOOD DAY.”

I don’t care whether he did find her hot or not, but now that he is following her it contradicts what he said?

First, you care, hence the six paragraphs of nervous rambling. Second, to your point, not necessarily. I follow plenty of people who are objectively attractive but not my type/don’t do it for me. Sometimes it’s a professional obligation because they followed you first and they’re in your field. Following someone on Instagram is not necessarily confirmation that you find them hot.

Unless they’re an IG model with 11k followers. In which case yes, he probably finds her hot. That’s too small of a fish to have caught the attention of a guy who doesn’t want to bang that fish.

I feel like the others are mature enough to appreciate her looks and just move on, but for my boyfriend to actually follow her, I find it a little disrespectful.

Here’s the thing: if your boyfriend wants to spend hours zooming in on the boner-conjuring bodyparts of some chick on instagram, he will find a way to do it whether or not he follows her. By that token, just because his buddies aren’t following her doesn’t mean they’re not thirsting over her posts. Heck, it could be that your boyfriend is the only Honest Abe among them. You might argue that him following her is the surest sign that he’s not doing anything weird. It’s too obvious! He followed her knowing you could see that. If anyone is out of line here, it’s all his scumbag friends who take their phones into dark, dank porta potties and pull her up, finish themselves, delete the evidence that they searched for her, and return to their “healthy” relationships.

(This is all presuming that she has a public profile. Which, given she has only 11k followers and is trying to climb from double-A minor league thotness to the 100k verified majors, is almost certainly the case.)

At what point do instagram models graduate to “not a threat” level? Is it 30k followers? 50k? 100k? Ladies, at what point do you simply laugh when you find out that your boyfriend is following an instagram model because she’s so far out of his league that you can sleep peacefully knowing your pathetic, peon boyfriend will never register on her radar?

If the roles were reversed, and my girlfriend were following some chiseled, damp dude who posts in black and white so the shadows accentuate his penile lines, the top tufts of his brittle pubes poking over a towel; a guy who has @Wilhelmina in his bio alongside an email for “booking” that isn’t his name but whose inbox he monitors himself… would that bother me?

I don’t think so. But then again, I’m 31. I’ve grown too old to care, fought too many wars to sweat the small stuff. I think, ideally, that he would be DMing her and she would be responding with single-word answers like “ha” and “fun!” I want them talking in a totally lopsided way. I want that conversation looking like a seesaw where she’s dangling her feet 10 feet in the air while he’s the fat kid on the ground, weighing them down.  I want him firing off shot after shot that falls pathetically into some nameless ocean, like a North Korean weapons test. That’s my wet dream.

I have thought about how I will bring it up, if it is suggested I should, and I won’t do it in an aggressive way, I was just going to present my analogies above and ask him if he would think its okay if I did something similar?

There is no way to bring this up that won’t be taken as aggressive. You’re not feeling your boyfriend out on renewable energy and its impact on the coal industry; you’re asking why he follows a hot chick on Instagram.

Once those fall flat and you start asking follow-up questions, he’ll get mad that you snooped through his following list. Then you’ll get mad that he’s mad, and it all unravels until you retire to separate quarters, slamming the doors behind you, marinading in your despair until he timidly taps at your door, enters, climbs into bed, spoons you the right way, kisses your neck gently, whispers those magic words—”she’s objectively good-looking but not my type”—and you both kick off your undies for a healing paddle to the shores of intercourse island.

Are you guys familiar with the Schrödinger’s Cat experiment? I might cut some corners here, but the idea is that a cat is sealed in a box with a poison that may or may not have killed it. Without being able to see inside the box, we can consider that the cat is both alive and dead—that two realities can exist at once. It is only once we open the box and observe the cat that we create one reality.

Similarly, if we don’t open our boyfriend’s following list, we’ll never know if he is or is not following the model. If we look and see that he is, then we have collapsed those two possibilities into one state of being. Our observation has perhaps caused that reality. And from a metaphysical standpoint, we are to blame.

If you like podcasts and want to hear from the other side of the equation, check out Oops. We cover this stuff with gusto!