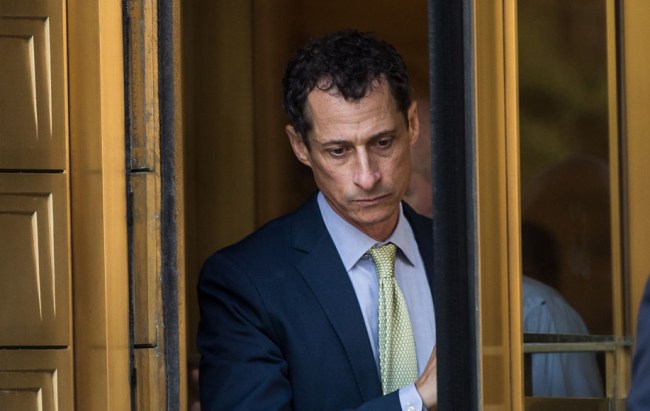 Remember that horrifically bad courtroom sketch of Tom Brady that took the internet by storm back in August of 2015?

It was SO bad that it transcended its awfulness and ended up becoming a goddamn masterpiece.

Tom Brady arriving at courthouse vs Tom Brady courtroom sketch (errr … after he was bitten by zombie?) pic.twitter.com/LUGVJ7wTqs

That was the work of the same artist, Jane Rosenberg, who also created this uncanny likeness of pharma-douche Martin Shkreli.

Well, she’s back and this time she’s somehow managed to top her previous work, which is almost impossible, with her latest courtroom rendering of now-convicted pedophile Anthony Weiner crying in court as his sentence of 21 months in prison was read.

Here's the Anthony Weiner courtroom sketch of him crying as sentence is handed down. https://t.co/ePhfSyDwKb pic.twitter.com/5Xo8GdD7oE

That is solid gold right there. Especially when you consider the following from TMZ…

Weiner’s team thinks he shouldn’t have gotten ANY time behind bars, especially because the judge acknowledged Weiner’s treatment program has shown promise. His attorney Arlo Devlin-Brown says the judge chose to make an example out of Weiner purely because of his celebrity.

No, the judge made an example out of him for being a pedophile who sexted a 15-year-old girl.

Aww, don’t feel so bad Weiner. At least your sketch is better than Taylor Swift’s was.

See ya in prison on November 6th, scumbag.