Last year in the fall, Arby’s unveiled a special venison sandwich in states heavy on deer hunting — Wisconsin, Minnesota, Michigan, Pennsylvania, Tennessee and Georgia. This year they’re bringing the special venison sandwich to to Arby’s locations nationwide. Except there’s a catch: It’s a one-day only menu item, so circle October 21 in your calendar.

Here’s all the details you need about this delicious sandwich from last year:

Arby’s venison sandwich features a thick-cut venison steak and crispy onions with a berry sauce on a toasted roll, according to the company.

The venison sandwich is “100% deer meat,”  with premium cut top and bottom round steaks from the hind quarter of the deer, according to Rob Lynch, Arby’s Brand President & Chief Marketing Officer.

Lynch said the company released the sandwich as part of “It’s Meats Season” campaign, which celebrates the start of hunting season.

“Bringing venison to our menu also allows us to continue to set ourselves apart from the competition when it comes to proteins,” he said. “You simply can’t find this at other restaurant chains.”

In other news, Arby’s will also be unveiling a special Elk Sandwich on October 21 in three states often associated with elk hunting: Colorado, Wyoming, and Montana.

If you haven’t had elk, go eat it as soon as you can. It’s tender and delicious. 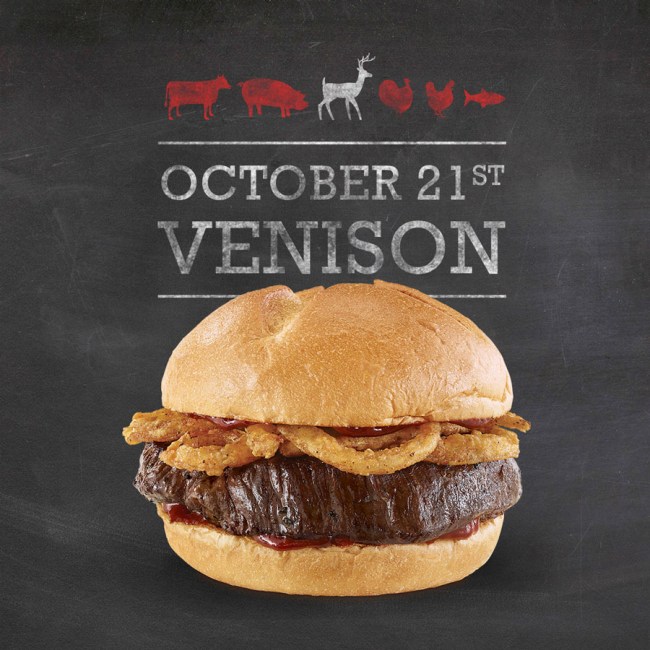