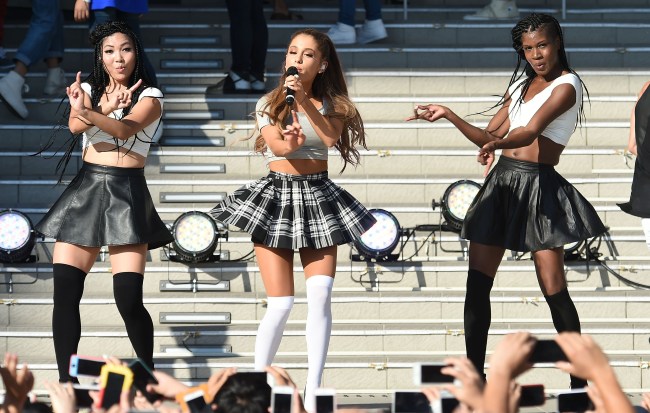 Just when Ariana Grande thought the worst of her misspelled tattoo was over, but alas the worst was yet to come. An outrage mob dragged the pop singer for her Japanese tattoo because they claim that the ink is cultural appropriation. The accusations of cultural appropriation were so loud on social media that Grande went on a Twitter rant to try to defend herself. Despite pleaded her case, it did not seem to change anyone’s mind on Twitter. Shocker, I know.

Last week, Grande got a new tattoo on the palm of her hand that was supposed to read: “7 Rings,” as a reference to her new hit single of the same name. But something was lost in translation and the tattoo actually said: “BBQ Grill” or what is a small charcoal grill in Japan known as a “shichirin.”

The internet laughed at Ariana’s tattoo fail and so the Thank U, Next singer got the ink fixed the very next day. Except that she didn’t get it fixed. In fact, she made it worse somehow. The new tattoo that was done by artist Kane Navasard said: “Japanese Finger BBQ.”

If you wanted any more proof that Ariana Grande is a white woman and culture vulture, look how she’s spinning the backlash. After strategically commodifying non-whiteness, she’s suddenly feigning innocence, spinning the criticism as unfair, and performing white woman victimhood. pic.twitter.com/nAlwBsVqkr

When people claim Ariana Grande’s image is “natural” and because “she’s Italian,” I think back to this video and cringe. She’s created an image of fake ethnic ambiguity and obscured her whiteness with a fake accent, fake tan, and by turning non-white cultures into an aesthetic. pic.twitter.com/j9h9PTtleg

Ariana Grande appropriates non-white cultures to be “sassy” and “exotic.” Yet once she’s called out she performs white woman victimhood and invokes her “anxiety” to manipulate people into thinking shes an ~innocent little girl🥺~ being bullied, while inciting her stans to attack. pic.twitter.com/y4i3z4zXHK

Grande lashed out with a Twitter rant and the tweets have since been deleted.

“I also went back and got it fixed with the help of my tutor to be more accurate. I can’t read or write kanji obviously. What do you want me to do? It was done out of love and appreciation. What do you want me to say? U kno how many people make this mistake and DON’T care just cause they like how it looks? Bruh… I care sooooo much. What would u like me to do or say? Forreal. There is a difference between appropriation and appreciation. My Japanese fans were always excited when I wrote in Japanese or wore Japanese sayings on my clothing. However, all of the merch with Japanese on it was taken down from my site, not that anyone cared to notice. I have crippling anxiety lol. I don’t like hurtin ppl. People on this app really don’t know how to be forgiving or gentle when someone has made an innocent mistake. No one considers feelings other than their own. It’s very pointless. Ion [I don’t] even know why I’m talking ab[out] this anymore.”

Ariana Grande is fighting back against accusations that she disrespected or appropriated Japanese culture with her new tattoo. https://t.co/2o4PtMqc3L pic.twitter.com/bBuz3fmrd3

Grande also told TMZ that she would “give y’all a million to get off my nuts.” Great, now she appropriating male genitalia.

@TMZ The next time you come for @ArianaGrande you need to get your facts correct. Chinese is not Japanese FFS 💀😂🔥 Deal with it. pic.twitter.com/LnHW7kmYEX

Be careful out there, you never know how or when the outrage mob will come for you.