Arnold Schwarzenegger Made A Rap Song And It’s Really Something 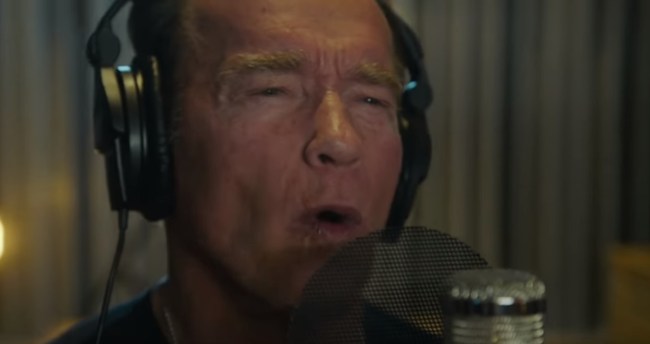 The 71-year-old former California governor appears on the track titled Pump It Up — The Motivation Song alongside fellow Austrian Andreas Gabalier. The 34-year-old folk singer is a very big deal in Austria where he has had seven #1 albums in his home country. In the new song, he waxes poetically about Schwarzenegger’s career and accomplishments because what other famous Austrians are you going to make a song about? Actor Christoph Waltz or chef Wolfgang Puck?

The song references Arnold’s Hollywood roles from The Terminator and Conan the Barbarian. The music video features plenty of new and old footage of Schwarzenegger including footage of both men from the song pumping iron at Venice Beach’s Gold’s Gym and doing push-ups in the studio when they’re supposed to be laying down the track, but this is “The Motivation Song” so how could they not?

Then Arnold drops some bars on the motivational track.

“Hey, I’m Arnold Schwarzenegger and listen carefully / Dig deep down and ask yourself, who do you want to be / Not what, but who – if you believe success will come to you/ Work like hell, trust yourself, and all your dreams come true.”

Of course the track ends with his catchphrase, “I’ll be back!” “Break some rules, knock the wall, don’t be afraid to fail. You have to think outside the box, I say no pain no gain, I don’t want to hear it cannot be done, always give something back. My name is Arnold Schwarzenegger and I’ll be back.” Wait. Did he just rhyme “back” with… “back?”

And why did he introduce himself twice in the same song with, “Hey, I’m Arnold Schwarzenegger.” I completely understand that he is Arnold “f*cking” Schwarzenegger and he can do as he pleases, but this seems a bit repetitive.

Is an Arnold Schwarzenegger song something we really need in 2019? That’s not our question to ask since what’s done is done and there is no putting this genie back in the bottle. The question that does remain is will this be your go-to romantic song for your love-making sessions? It has to, right?

This actually isn’t the first song dedicated to Arnold. In 2011, Australian electronic and synth artist Luke Million released his song Arnold as a musical ode to the Austrian bodybuilder.