The Story Of How A Man Was Tackled, Spat On, Arrested For Stealing Sand From Augusta And It Cost Him $20,000 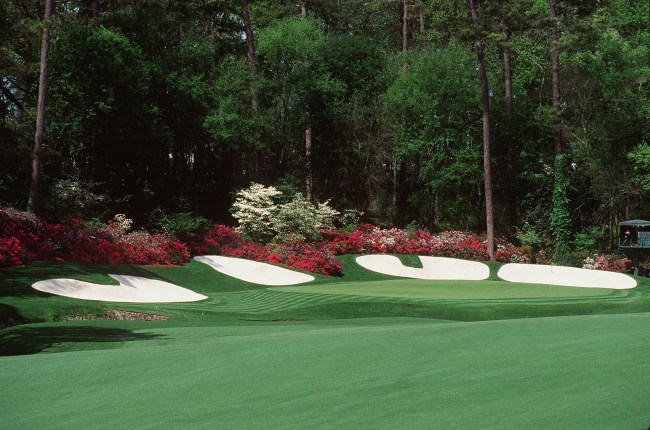 A man was so enamored with the Augusta National Golf Club that he wanted to take a piece of that exquisite beauty back home so his son could experience it. The golf enthusiast stole some of Augusta’s world-renowned white sand and it ruined his life for years.

Nothing about Augusta National Golf Club is ordinary, everything is extraordinary, even down to the grains of sand. The iconic white sand bunkers are not only magnificent, but they are one-of-a-kind. The 44 salt-white sand bunkers at Augusta National are filled with Spruce Pine sand, said to be one of the purest sands on the planet. The sand is crystal white which contrasts superbly with the green fairways.

Since the early 1970s, Georgia’s Augusta National Golf Club has been using white sand from the Spruce Pine Mining District in western North Carolina. This area in the Blue Ridge Mountains is known for its exquisite feldspar and quartz, that has been mined since the 1700s. The Spruce Pine quartz is so pure that companies are lining up to get their hands on it to make silicon for computer chips.

Masters co-founder Clifford Roberts brought in the mineral and it was front-and-center in the 1975 tournament. The Spruce Pine sand is so pure that it prevents golf balls from burrowing. “It’s very soft on top and has a firm base,” said 2007 Masters champion Zach Johnson. “You can’t necessarily spin it a ton, but it’s pure. What’s great about it is you have substantial high lips, but you won’t see a ball plug. Ever. It’ll hit the bank and go back to the middle of the bunker or go through it.”

With all that being said, you could understand how someone visiting Augusta would be enchanted by the shimmering sand and want to take a little bit as an awesome souvenir. Clayton Baker was lucky enough to experience Augusta National Golf Club and couldn’t help but to steal some of the legendary sand. That mistake changed his life.

Baker was very sick in the fall of 2011 and doctors weren’t sure what he was suffering from. They thought he could have multiple sclerosis (MS) and that is often times a death sentence. Baker and his family thought he was dying. Not knowing how long Baker had to live, a wealthy friend arranged a once-in-a-lifetime for Baker to go to the Mecca of golf, Augusta National. Thankfully, Baker later learned that he had Lyme Disease and has since recovered.

On April 8, 2012, Baker had the opportunity of a lifetime and was at the 76th Masters Tournament where Bubba Watson won the championship. The final group had already made it through the 10th hole and the area was empty. Baker was only a few yards away from a bunker, so he snuck under the gallery ropes, walked across the fairway and scooped some of the white sand into his beer cup.

Baker wanted to give the sand to his son. A few months earlier, Baker talked ESPN host Stuart Scott to get him some dirt from the Rangers Ballpark in Arlington during the 2011 World Series between the Texas Rangers and the St. Louis Cardinals and he gave it to his son.

Baker’s friend Spencer Hoffman who was there with him, knew something was up when a group of Augusta National guards surrounded them. The guards allegedly slapped the sand out of Baker’s hand and then tackled him to the ground. The guards then radioed for backup.

Deputies from the Richmond County Sheriff’s Office arrived on the scene, handcuffed Baker, and demanded he take a breathalyzer test.”You dirty piece of sh*t,” one of his arresting officers said to Clayton. “You disrespected this national monument in Augusta.” Baker alleges that the police officer spat on him. “I hope you know you’re going to jail for this,” another cop told him before pushing him into an unmarked police car.

Baker was arrested and taken to the county jail where he was placed in a cell. “They took me in and they threw me in a jail with all the criminals,” Baker told NJ.com. “There was a big guy in the cell standing on the toilet, yelling at the me, ‘Tell them I need some (toilet) paper!'”

Baker was charged with disorderly conduct. For his one phone call, Baker called his wife, who thought it was a wrong number and hung up the phone. Baker needed to get out of jail because his friends had arranged a private jet to take them back home that evening.

Richmond County sheriff’s Capt. Scott Gay said Baker was drinking heavily at the time of the incident. “We’re good people. We are not looking to arrest anybody,” Gay said. “However, when you cross that line in the sand… no pun intended.”

Baker’s blood-alcohol level was below the legal limit for a DUI. The police also said that Baker led them “on a short foot chase,” a claim that Baker and Hoffman deny. “All the reports about him running around like crazy are bullsh*t,” Hoffman said.

Finally, Baker paid his $285 bond and was released from jail. He met up with his friends at the Augusta airport, but was late. Baker’s tardiness from being arrested caused the plane to take off later than scheduled and the flight back to Oklahoma was several thousands of dollars more expensive according to NJ.com.

The sand-stealing incident became a national story, making headlines on ESPN, The Golf Channel, Golf Digest and the Washington Post. One story online said went so far as to say he had a sexual sand fetish. Baker didn’t want to leave his home or go to work because he was being ridiculed for being the sand stealing guy. “I was playing in a golf tournament in my pissant hometown in Texas, and guys who didn’t know me were walking up with sand and saying, ‘Here you go!'” Baker said. “I was seriously depressed for weeks.”

Baker lost his $4,500 security deposit on the Masters badge because of Augusta National’s strict ticket policies. The friend who got Baker the ticket was banned for life from buying anymore Masters badges. Baker also had to hire a lawyer to defend him in court.

On May 10, 2012, Baker’s Augusta-based lawyer Roger Claridge represented Clayton in court. “That stuff comes down from the top,” Baker’s lawyer said. “Augusta National tells the sheriff deputies what to do. I’m not going to tell you that Mr. Baker did nothing wrong — and, quite frankly, I told him that — but it could have been handled a lot differently.”

“Let me make sure I understand this,” the judge, William D. Jennings III, said in court. “He rode a jet to Augusta to collect dirt? … Had he been successful in his attempt, what, pray tell, would he have done with it?” The charges against Baker were dropped on the condition that Baker forfeit the $285 bond.

After all was said and done, Baker said the few grains of Augusta sand cost him $20,000. “I did something I shouldn’t have done and it cost me $20,000 and a lot of public shame,” Baker said. “That seems like a lot for a handful of sand.

“I know it seems kind of petty,” Capt. Gay said. “However, you are talking about a golf icon. I certainly do not want anyone punished more than they deserve to be. But when people are here, they need to understand the traditions of Augusta and the Augusta National golf course.”

“They made an example out of me. I understand that. I regret that. But the way they handled it? That place is a bunch of bullies,” Baker said. “From a fan’s perspective, before I had seen it firsthand, that was hallowed ground for me. But it was just a bunch of a bullies.”

So if you’re going to the 2019 Masters, make sure you don’t steal the Augusta sand.