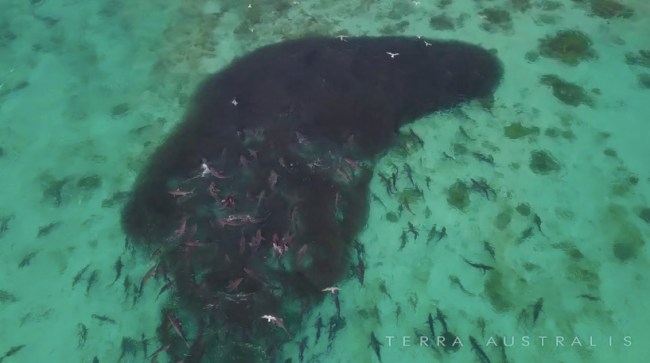 Few things in life bring together as many living creatures as a bait ball. It’s the open ocean equivalent of a watering hole. Instead of animals coming from miles away to drink water in the middle of the jungle, you’ve got apex predators and game fish swimming from all over to feast on thousands of fish when a bait ball forms. It’s easy pickings.

Down in Western Australia, Andre Rerekura is a commercial diver and he owns an underwater production company by the name of Terra Australis. According to Grind TV, Andre recently released this video in which he dives into the center of a massive bait ball filled with up to 200 sharks:

The sharks you see are Bronze Whalers and Sandbar Whalers according to Grind TV, and a handful of bull sharks. One of the whalers reportedly measured up to 10 feet long.

As for why this dude chose to jump headlong into a pile of sharks, here’s what his colleague who filmed the video told The West Australian: “It’s a calculated risk and he spends a lot of time in the water with sharks learning their behavior.”

Is this dude crazy or absolutely batshit crazy? You tell me. (h/t Grind TV)