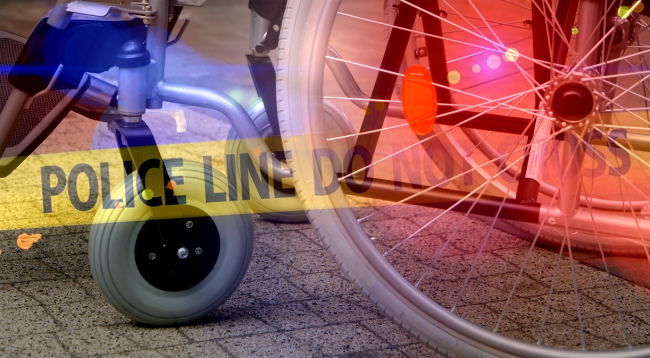 Federal authorities at New York’s John F. Kennedy International Airport recently seized $450,000 worth of cocaine that they found hidden inside the wheels of a woman’s wheelchair.

The reason they were checking her out was because the wheels on her wheelchair were suspiciously not turning, according to an agency press release that began, “The wheels on this passenger’s wheelchair stopped going round and round.”

When they noticed that the wheels on the wheelchair were not turning, they decided that maybe they should x-ray the wheelchair and in doing so discovered an anomaly in all four wheels.

That anomaly turned out to be cocaine inside all four wheels.

The woman was arrested for the importation of a controlled substance and now faces federal narcotics smuggling charges. She was turned over to Homeland Security Investigations following her arrest.

The weight of the cocaine that was seized by CBP officers was approximately 28 lbs. with an estimated street value of $450,000.

This translates to approximately 75,000 doses (100-200 mg.), a lethal dose of cocaine is roughly one to three grams, so the amount seized by CBP and kept out of our neighborhoods amounts to roughly 6,000 lethal doses.

“CBP stands steadfast and determined in working with our partners to identify the trans- national criminal networks responsible for importing these deadly drugs into our neighborhoods.” said Francis J. Russo, Director of CBP’s New York Field Operations. “CBP’s mission is to guard the borders and ports of entry 24/7, 365 days a year to prevent these dangerous drugs from potentially killing our family, friends, and neighbors.”

On May 31, a passenger from the Dominican Republic was arrested at Charlotte Douglas International Airport for concealing packages of cocaine within the seat cushions of his electric wheelchair.

As strange as those stories are, one of the most bizarre stories of someone trying to conceal cocaine while traveling through an airport occurred in 2019 when a man tried to conceal $34,000 worth of cocaine under his toupee.