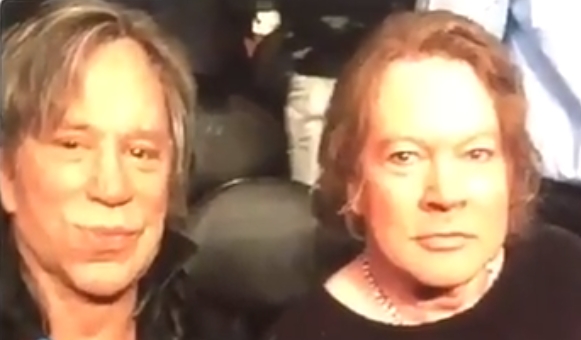 Did you know that some TV stations still celebrate people’s birthdays and anniversaries on the local news? What a charming and sweet thing to do for the 11 87-year-olds who still watch local TV news. One television station got duped into thinking that Axl Rose and Mickey Rourke are a married couple celebrating their wedding anniversary.

The local NTV station in Newfoundland, Canada, (Of course Canada still does these wonderfully sweet live celebrations on air) was wishing Max and Geraldine Bailey a very happy 50th wedding anniversary. One itsy-bitsy problem… Max and Geraldine Bailey are actually Mickey Rourke and Axl Rose. The photo of the Hollywood actor and Guns N Roses singer was taken on December 1st when the two stars attended the Deontay “The Bronze Bomber” Wilder versus Tyson “The Gypsy King” Fury fight at the Staples Center.

No, these are not two retired school teachers waiting for their grandkids dance recital to begin while their husbands find parking.

This is Mickey Rourke and Axl Rose at a boxing match in LA over the weekend. pic.twitter.com/1cooQ4Fed9

The prankster trolled the television station into thinking that they were just an old Canadian couple.

For the record, Axl Rose is only 56-years-old and Mickey Rourke is 66. Drugs are bad kids.