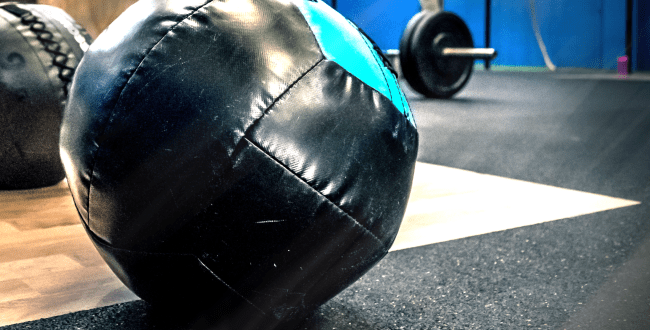 The sheer determination the little lad showed, along with his impeccable form in performing the lift, captured the hearts and imagination of the thousands of people who watched him.

The video was captioned, “He was determined to pick up this 15lbs medicine ball and so he did!”

It begins with the youngster approaching the medicine ball, getting into proper squatting form. Then he wraps his hands around the 15 pound ball, adjusts his grip when he realizes it’s not good enough, then leaning back slightly, he pulls the medicine ball up with great strain, all while sucking away on his binky the entire time.

The big boy then lowers the ball to the ground, keeping his good form, and lifting it again!

A third attempt was aborted when he realized he had maxed out his reps for the day.

This kid is 100 percent pure fitspiration.

So far he has amassed over 2,300 comments regarding his feat of strength, most of which expressed just how impressed they were with what they had witnessed.

“Shoulder width stance, full squat, and that power move at the end had me dying. This babys [sic] got better form than most,” wrote Redditor H0L3PUNCH.

“My gym teacher taught us to ‘lift like a baby’ when I was in high school. He walked us through how babies have perfect form when squatting. It was one of those ‘ah ha!’ moments,” replied Ember2Inferno.

“Baby’s [sic] are excellent breathers too! Breath with your stomach, not your chest,” added Kuritos.

“Babys [sic] are born with perfect form lmao. We learn our mistakes throughout our life,” laughed LtLunchxbox.

“Toddlers just know what’s up when it comes to deadlifts. And they literally do squats all day,” commented dirtyswoldman.

“And that back, straight as a board. This kid is going places,” responded scootdoodler.

“Form was pretty decent on his first lift. Drove his legs into the ground and used his back a bit in the end. 2nd lift it just unraveled. Could really see the fatigue setting in,” explained ProteinSpikeVariant. “[Good] usage of the pacifier tho, mentally in tune and breathing seemed adequate. I see great things on the horizon.”

“Grows up to become a power lifter that can’t perform without a pacifier,” Ember2Inferno joked in response.