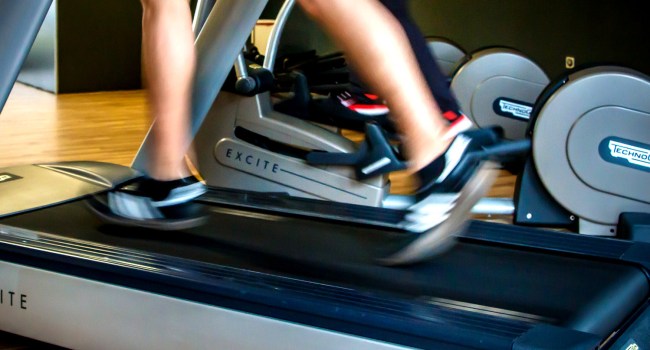 You need to exercise, but the idea of doing it right at that particular moment has you less than enthused. Almost everyone has been there at one point or another (or several times).

Which is why so many people on the internet have fallen in love with a morbidly obese cat named Cinderblock.

For you see, Cinderblock, who weighs in at a robust 25 pounds or about twice what her weight should be to be considered healthy. And she hates the treadmill.

The adorably fat cat is currently in the care of Northshore Veterinary Hospital in Bellingham, Washington after her owner had to deal with her own medical issues and her father’s and couldn’t care for Cinderblock anymore.

Veterinarian Brita Kiffney was asked to euthanize Cinderblock, but couldn’t bring herself to do it.

“I couldn’t do it and asked her to relinquish her to me,” Kiffney told CNN. “She agreed and was grateful, as she really didn’t want to euthanize Cinder but was overwhelmed with the care of her father. So, she is morbidly obese, due to overfeeding by the father.”

Thank goodness, because video of Cinderblock being thoroughly annoyed and keeping just one paw on the treadmill she was asked to exercise on has been an inspiration to literally millions of people.

“You working out?” you can hear the veterinarian asking Cinder.

Good thing too, because the internet cannot get enough of her.

Me getting ready for Hot Girl Summer 2020:#Cinderblock
https://t.co/zefMJzEkaa

Cinderblock is me lifting my 5lb weights like "OKAY IM TRYING" https://t.co/W02CoDChIr

U ARE DOING GREAT CINDERBLOCK https://t.co/7JIM1F6vJ5

Me when my SO says we should start working out together #Cinderblock #chonky
https://t.co/VgOWoe5UIw

I'm emotional invested in a cat's weight loss journey on instagram. We will get through this, Cinderblock. pic.twitter.com/4qt8x4pv4u

IF CINDERBLOCK CAN GO TO THE GYM TODAY, SO CAN I. 💪🏼 https://t.co/YWB8aftjMR

please let cinderblock know that i would cross an ocean for her https://t.co/AtXjRQNpQb

I think we all have.