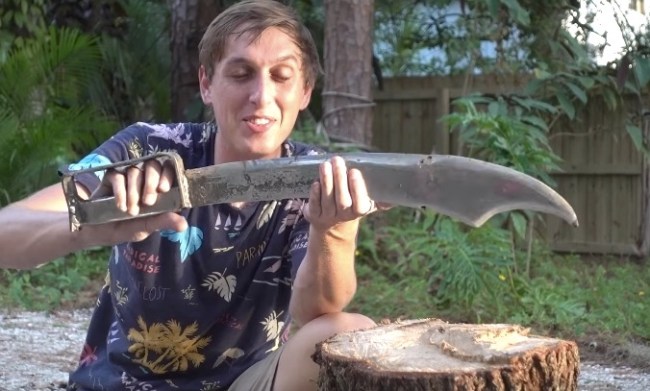 The Backyard Scientist is back at it again, in his backyard of course. In his latest episode, he’s making a sword, but not just any regular old sword made from steel. Sure, there’s some steel in this sword because he thought adding about 5-pounds of steel would help add metal after the incredible fire, but the sword is being made primarily using THERMITE.

I’m sure you’ve heard of thermite. It’s a material occasionally used by the U.S. military to burn up/dispose of enemy equipment in battle. It’s most commonly used in industrial welding.

In order to make this thermite sword, the Backyard Scientist constructed a mold using insulating firebricks, packed sand, and molten hot steel. The end result was what is probably the world’s first sword made from Thermite. There have been metallurgists for centuries making swords used in battle. So it’s pretty fucking awesome that some guy on YouTube just became the world’s first person to make a sword using a new method. Gotta respect the innovation here even if it’s borne from a place of boredom.