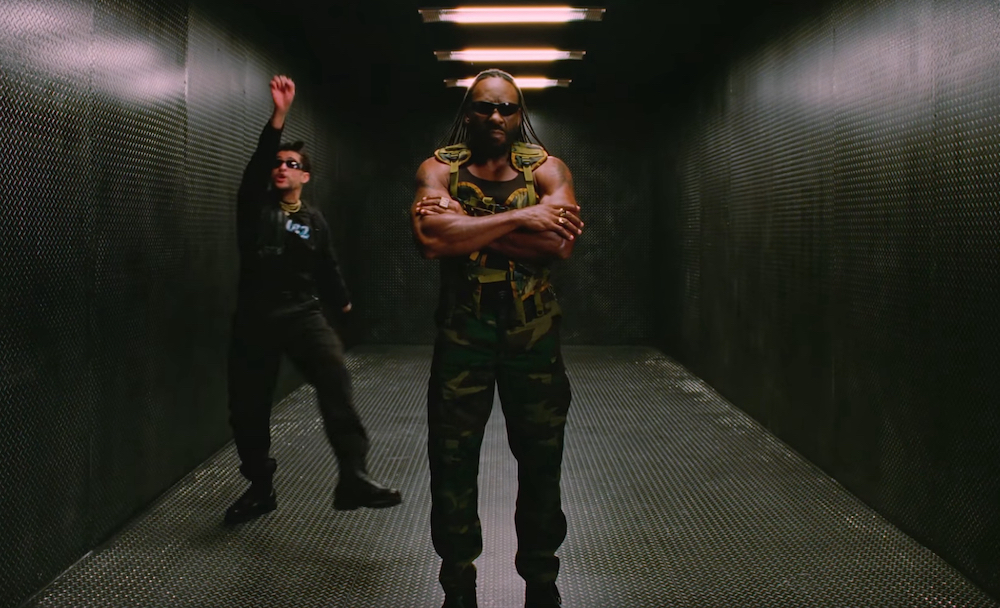 Two-time WWE Hall of Famer and five-time WCW World Champion, Booker T, can add one more line to his impressive resume. He’s one of the few wrestlers with a rap song in his honor.

Rapper Bad Bunny is a huge wrestling fan and the Puerto Rican rapper, singer, and songwriter makes those feelings for ‘rasslin are obvious in his lastest song, “Booker T.”

Bunny released the video for the song and the former WWE star appears throughout the entire, standing with his arms folded and dressed similar to his G.I. Bro look he sported during the tail-end of his WCW run.

Here are the lyrics to “Booker T” for people who don’t understand Spanish.

Hey Hey
I put them to dance “La Pelúa” (wuh)
And the one who does not dance, let them lose it (hey)
Son ‘e whores, do not cuquen me (no)
Read the numbers so that they are educated (wuh)
I don’t do songs, I make hymns so they don’t expire (hey)
In this genre I was a Hadouken (hey, hey, hey)
And they became extinct like dinosaurs (prr)
Before I turn off ‘the sun turns off
I go up ‘and break’ the elevator
The high school that Bulbasaur threw at them
Ah damn rabbit
Now I look at them from above and from afar ‘, hey
I don’t answer DM, no, talk to my management
But he is also going to peck
I swear that I did not want to be embittered, hey
I put all my crush, shh, I’m bored until ‘e chichar’
And I am a milly without using Richard
Yankee retires and we’re going to switch
I’m going to be the boss, they are going to sign me
My name will always be heard
Because I’m at my peak
I’m at my peak (‘toy at my peak)
I’m a king, champion, Booker T (wuh, wuh, wuh) (Booker T)
I’m at my peak, hey (‘toy at my peak)
I’m at my peak, ha (‘toy at my peak)
Look at me what I’ve become (look at me, look at me)
He is bothered by my composer award
But it is that nobody composes
None of these people write in their songs, so don’t get excited (uh)
The best-selling album of this fucking year (hey)
I took them to school, everyone trying to make a sequel
They are still in line, nobody sneaks up on me (hey)
Cheki, brunette, cheki
Cheki, brunette, huh
Bad Bunny took all the ‘prizes’ and the bastard didn’t even go (eh)
You paying to ‘go viral’ (hey)
Me pasting songs without making a promo (promo)
People wonder how (how?)
Since they were little they know how we are
I never ask for tenqui
I’m coco, you bakin ‘(wuh)
Booker T breaking me
I’m at my peak, bastard (hey, hey, hey, hey, hey, hey, hey)
And I’m going to continue at my peak, bastard, hey
Y vo’a seguir en mi peak, cabrón, ey
I’m a king, champion, Booker T, hey (Booker T)
Soy un rey, campeón, Booker T, ey (Booker T)
I’m at my peak, (I’m at my peak)
Estoy en mi peak, (estoy en mi peak)
And I’m going to continue at my peak, hey, hey (normal)
Y vo’a seguir en mi peak, ey, ey (normal)
Look at me, what about you?
What you what?
Nah-nah
Bastard, you are feka
Can you dig it, sucker?
Can you dig it, sucker?
Hey Hey
Hey
I’m not going to front, give a repeat, bastard
So you can see that I’m fine, motherfucker

Booker T was a recent guest on our “Endless Hustle“ podcast and I highly recommend giving the episode a listen.