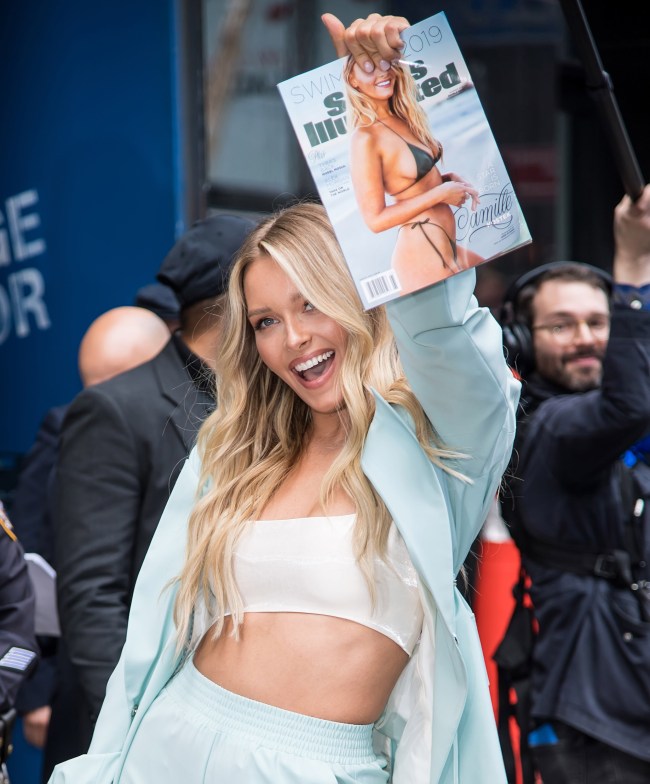 In further proof that who you know is just as important as who you are or what you’ve accomplished, Gronk’s girlfriend Camille Kostek joins Tyra Banks and Alex Morgan as cover models for the 2019 Sports Illustrated Swimsuit Issue.

Banks, 45, who was the first African-American woman to appear on the cover of Sports Illustrated Swimsuit Issue in 1996, graces the cover for the third time in her modeling career.

Kostek makes her Sports Illustrated Swimsuit Issue cover debut after participating in the magazine’s 2017 model search and making her first appearance in the issue in 2018.

Needless to say, all three ladies were very excited to receive this honor.

A Star Is Born. Here's the moment Camille Kostek found out she was on the cover of #SISwim 2019. 🤗 pic.twitter.com/medd8lJArK

“A short year ago, Camille Kostek was a Sports Illustrated Swimsuit model search hopeful, vying for a coveted rookie spot in the 2019 issue,” said SI Swimsuit editor MJ Day. “Today, an image from the first shoot of her career graces the cover. Homegrown in every sense of the world, it’s been incredible to watch Camille come into her own in this space and use her influence to address some of the trappings that come with being a public personality. In a short amount of time, she has leveraged the power of her brand to inspire and educate others while at the same time persuing her own dreams. She is a star on the rise.”

Supermodel Paulina Porizkova is back in a 👙 for #SISwim 2019, and she's NEVER LOOKED BETTER! https://t.co/Qd4hVbtxbu pic.twitter.com/tYSiMwnHTy

Olympic gymnast @Simone_Biles returns to #SISwim and she’s not afraid to prove that strong is sexy https://t.co/bZoDVvnXDm pic.twitter.com/qwcT12d7Rj

When it comes to women's equality, the members of the #USWNT aren't just talking about change, they're creating it https://t.co/9jhaknmAr9 pic.twitter.com/jOiMwKGBDY

Cover model @alexmorgan13 shines on and off the soccer field! https://t.co/QZHii5pV6Q pic.twitter.com/a2UD5yTahf