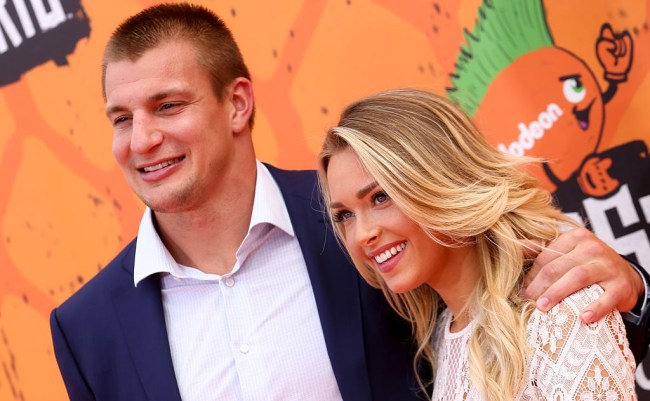 Rob Gronkowski’s girlfriend (it’s official now), former New England Patriots cheerleader Camille Kostek, has been named the first SI Swimsuit Rookie for the 2019 issue. Which is kind of odd since I thought I already saw her modeling in last year’s issue. Oh yeah, I did.

Anyhoo, regardless of how you slice it, Kostek has been “officially” named a 2019 Sports Illustrated Swimsuit model and rookie and her boyfriend Rob Gronkowski couldn’t be more proud of her.

“Camille has been working her whole life to get in the SI Swimsuit issue,” Gronk continued. “Ever since we met she’s been talking about, every single day basically… When she got the news she told me all about it. I couldn’t be more excited for her.”

The 26-year-old Kostek was also pretty fired up.

Apparently, part of her preparation for her upcoming her rookie spread on Kangaroo Island in South Australia involved working out with her guy, reports Sports Illustrated.

So we headed back to the home of her boyfriend, known by the world as “Gronk,” to see what a training session between the happy couple looks like. And let us just tell you, he did not cut any corners for his girl!

“When I workout alone, as opposed to with Rob, I’m so much more motivated,” Camille said after the grueling session. “His work ethic is super strong. His endurance exceeds mine so it sets the standard really high…I don’t want to move on to the next workout until I can get at least half the speed or one rep that is the speed he was at.”

“This time last year I was shooting for Sports Illustrated Swimsuit 2018 in Belize as one of the final 6 finalists for #SIswimsearch,” Kostek wrote on Instagram. “My bags are packed as I head to South Australia as not only a 2019 official Rookie, but as the first up to shoot for the @si_swimsuit 2019 issue!! My excitement will never dull for each time I pack my bags to work with this team. I’ve told you 100 times and I’ll say it again and again….Chase your dreams my friends, it’s a feeling that makes you feel alive on the journey and complete euphoria once you get there. IT’S GO TIME.”