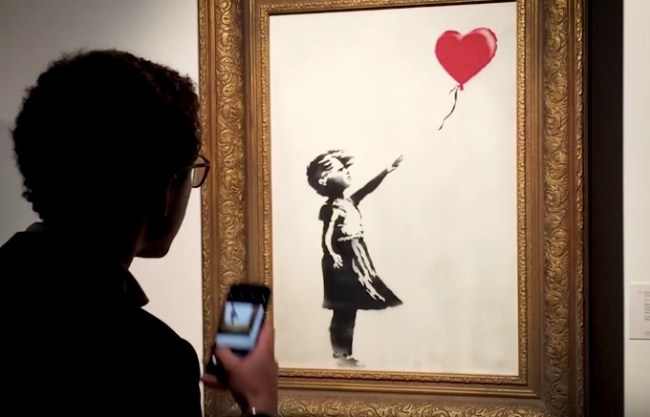 He’s been pulling stunts for his entire career, popping up undetected and leaving his iconic artwork for unsuspecting passersby. He took New York by storm a few years ago when he dropped a new art installation every day for a month, one of which included selling pieces of his art in Central Park for $60 a pop.

Banksy sold his own artwork? Yup, but that was him selling the art on his terms. It wasn’t one of his famous pieces hitting the auction block at Sotheby’s Auction House and fetching over a million dollars. That’s what recently took place and it was an event that completely shocked the art world.

Banksy’s The Girl and Balloon sold for $1.4 million at an auction from Sotheby’s. Moments after the piece was sold, a paper shredder was remotely activated and the art was shredded in half.

Everyone in the room looked on in horror as the artwork self-destructed but it didn’t take long for people to realize that this stunt actually caused the piece to drastically go up in value. Fortune estimates that the piece already doubled based on the shredding.

Now, Banksy has released a ‘Director’s Cut’ on his YouTube which details how everything happened and it shows that the paper shredding didn’t exactly go as planned. The video implies that the entire piece was meant to be destroyed, not just half. I can only imagine this causes the value of the artwork to go up EVEN MORE.

Here’s the behind-the-scenes clip from Banksy:

The message ‘in rehearsals it worked every time’ is pretty clear. It means that the entire 2006 The Girl and Balloon was supposed to be destroyed.

Now, the question is whether or not we are willing to believe Banksy and these clips. There is a lot of speculation that it was all a publicity stunt and some claim that Sotheby’s was even in on the stunt while others argue that Sotheby’s would never compromise their stellar reputation like that.

Banksy shared a previous clip of the paper shredder which claims this stunt was planned years ago just in case someone ever tried to sell his piece at auction and profit off his art. I’m skeptical here because how in the hell would a battery from 2006 stay charged through 2018 with enough power to run a paper shredder? There has to be something more going on here, right?