Banksy Shares Clip Of Him Building The Hidden Art Shredder ‘Years Ago’, Says It Was His Plan All Along 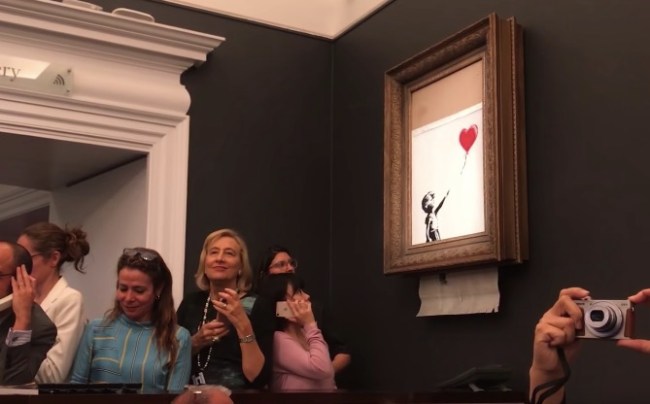 I’m guessing most of you heard about what happened at Sotheby’s Auction House in London last week but for those of you who missed the news I’ll fill you in real quick.

Banksy‘s piece of a little girl reaching out to grab a red balloon (‘Girl With Balloon’) sold at auction for $1.4 MILLION and seconds after the gavel was pounded and the auction was over a remote trigger activated a paper shredder inside of the frame and the artwork was shredded as horrified auctioneers looked on in astonishment.

It’s now being called the ‘self-destructing Banksy’ by many. A lot of people are speculating over who was in on the gag and whether or not Sotheby’s was involved. Given that Banksy is a faceless figure and nobody knows his real identity a bunch of people believed that he could’ve been in the auction room at Sotheby’s to activate the shredder and witness the final form of his art.

Banksy’s true identity remains hidden from the public but he still maintains social media profiles. Well, someone maintains them for him even if it’s not Banksy doing the posting.

In response to the news over his shredded art, Banksy published this short clip in which he claims to have built the hidden paper shredder years ago just in case his prized work of art was ever put up for auction. Here he claims it was his plan all along to thwart a successful auction and not some random stunt pulled at Sotheby’s.

Personally, I’m calling bullshit on this. Sotheby’s claimed they’d been ‘Banksy’d’ and weren’t in on the gag and even if that part was true I don’t see any possible way that he pulled this off without recently altering the frame.

Did he really plan ahead to have a battery that’d click on after several YEARS of not being charged? The painting was from 2006. We’re supposed to believe he snuck a battery in the frame powerful enough to run a paper shredder and it stayed juiced up for over 12 years?

For Sotheby’s part, they seem to be adamant about not being involved in this ‘stunt’ at all. Which I believe, to a degree. I’d be shocked if they didn’t run this through an X-Ray at some point but I have no way of knowing if they did or didn’t.

In the video, Banksy quotes Picasso with “The urge to destroy is also a creative urge.” He’s clearly trying to make this into a grand stunt that was planned all along, and not something that was drummed up a couple of months ago because nobody’s been talking about him much lately.

Again, I call bullshit. Everyone was in on it. The price on this piece is now going to soar and it’ll be worth exponentially more than it was before. According to Fortune, the value has ALREADY doubled in the few days since the piece was shredded.