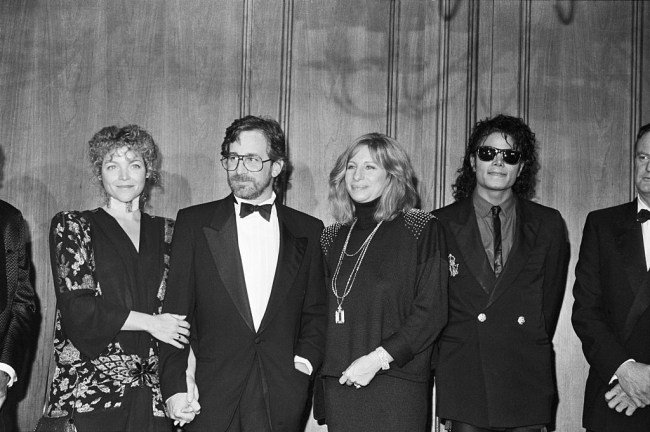 Streisand gave an interview to Times of London and she attacked Michael Jackson’s accusers from the HBO documentary Leaving Neverland, Wade Robson and James Safechuck, and their parents.

Streisand launched a nuclear-level hot take in defense of Michael Jackson. “You can say, ‘molested,’ but those children, as you heard say [the grown-up Robson and Safechuck], they were thrilled to be there,” Streisand said. “They both married and they both have children, so it didn’t kill them.”

Not satisfied with nuking herself, she took the child molestation accusations to another level of absurdity and insensitivity. “His sexual needs were his sexual needs, coming from whatever childhood he has or whatever DNA he has,” Streisand claimed.

Streisand didn’t stop there. “I blame, I guess, the parents, who would allow their children to sleep with him,” she said in the interview. Streisand was asked about her feelings about the abuse allegations. “It’s a combination of feelings. I feel bad for the children. I feel bad for him,” Streisand said.

Robson and Safechuck both appeared in the Leaving Neverland documentary where they allege that Michael Jackson subjected them to years of sexual abuse after grooming them. Both claim that they suffered through psychological turmoil throughout their lives from the abuse.

Leaving Neverland director Dan Reed confronted Streisand on Twitter. “‘It didn’t kill them,’ @BarbraStreisand, did you really say that?!”

“It didn’t kill them” @BarbraStreisand did you really say that?!#LeavingNerverland https://t.co/p4sIaPIHK6

The internet was not having it and dragged Barbara Streisand hard on social media where many said the legendary singer was “canceled.”

Barbra Streisand had such a long running program before getting cancelled. pic.twitter.com/CXUHPqoDDT

It is with the heaviest of hearts that I cancel Barbra Streisand. https://t.co/h5mmHhKZN4

I've changed my mind about cancel culture just so Barbra Streisand the pedo apologist can be cancelled. Jfc https://t.co/b0j118fsEV

As Barbra Streisand proves once again: all ageing celebrities should be kept in zoos

Live look at Barbara Streisand after being cancelled.