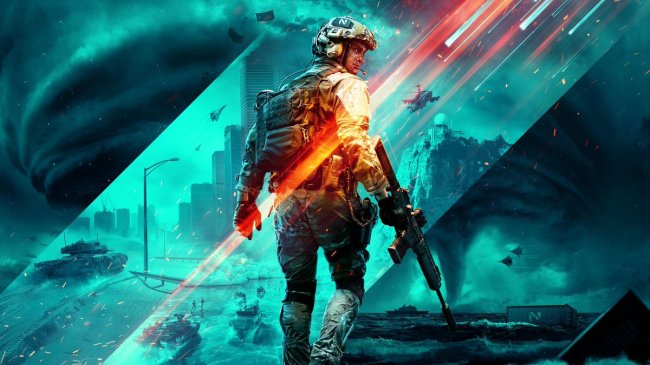 The reveal trailer for Battlefield 6 exploded online on Wednesday morning. The upcoming modern warfare video game will be titled Battlefield 2042.

The latest first-person shooter takes place 100 years before Battlefield 2142, which EA DICE debuted in 2006, and well past the last two Battlefield games that were set in World War I and World War II.

Battlefield 2042 will feature robot dog tanks, battles on ice with hoverships, high-flying helicopter skirmishes between skyscrapers in a city, high-altitude dogfights between jet fighters, and fighting a war amidst a tornado. There also seems to be a lot of wingsuit action in the military-based game. But Battlefield 2042 will not feature a campaign mode.

More #BATTLEFIELD2042 images, including some of the specialists. 👀 pic.twitter.com/nzFSzMcDGM

Battlefield 2142 was teased in April by DICE general manager Oskar Gabrielson, saying that the latest edition of the warfare franchise included the “biggest team ever” at DICE’s studios in Gothenburg and Los Angeles, which included help by Criterion Games. Gabrielson said Battlefield 6 will deliver “a jaw-dropping experience for you to enjoy later in 2021.”

“I can tell you it is a bold step,” Gabrielson said. “It has everything we love about Battlefield — and takes all of it to the next level. Epic scale. All-out military warfare. Crazy, unexpected moments. Game-changing destruction. Massive battles, packed with more players and mayhem than ever before. All brought to life with the power of next-gen consoles and PCs.”

“The next vision of Battlefield takes all the destruction, player agency, and vehicle and weapon combat that the franchise is known for and elevates it to another level,” EA CEO Andrew Wilson
added. “The technical advancements of the new consoles are allowing the team to deliver on a true next-gen vision for the franchise.”

The new Battlefield game will embrace the gaming power of PS5 and Xbox Series X, which should “bring massive and immersive battles to life with more players than ever.” This backs up rumors of up to 128 players will engage in warfare in the online multiplayer mode.

Battlefield 2042 is said to feature seven massive maps from Seoul to deserts in Egypt.

Battlefield 6 has a full release date of October 22, but EA Play members will get early access on October 15.