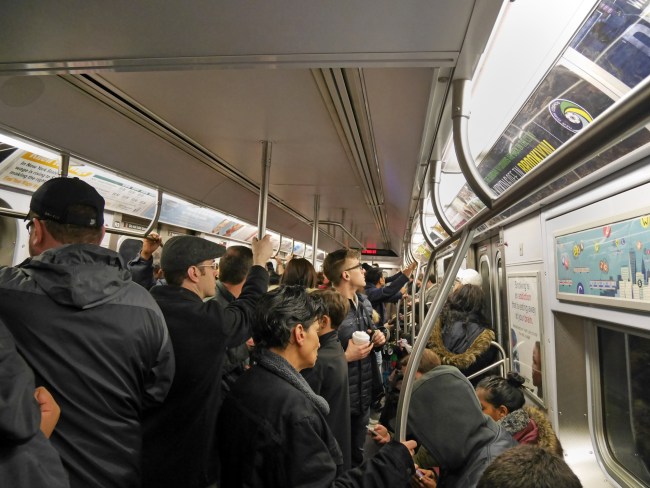 I lived in New York City for five years and you will never find me arguing against it being the best city in the world. It has a way of making you feel like you’re someone while simultaneously allowing you to be no one, just another nameless face happy to be riding the lightning bolt like the other 8 million who choose to live above piss-smelling sidewalks for the singular experience.

But, that anonymity is a blessing and a curse, and after a while you become desensitized to the other rats in the race in favor of the narcissism required to thrive in a city that’s all soul and no heart. Try waving to a stranger on the streets of New York and you may find yourself in a court-ordered ankle bracelet.

Another harsh reminder of just how prickly NYC can be comes from the recent story of a 2-year-old getting punched in the face by a panhandler on a Manhattan subway train.

The toddler was sitting on his mother’s lap on a northbound C train at Frederick Douglass Boulevard and West 116th Street in Manhattan shortly after 3 p.m. Saturday when a female beggar walked between train-car doors and started asking passengers for money, according to cops and sources.

“Ma’am, Can you please stay 6 feet away?” the boy’s mom asked the panhandler, sources told The Post.

The beggar then intentionally stepped on the foot of the mother before throwing a combination of punches that caused minor visible injuries to the child’s face and ear.

“She turned and started punching the baby multiple times,” the mom said. “She didn’t even hit me.”

The 21-year-old mother reportedly lobbied the subway passengers for help, but “no one did nothing,” despite every seat being occupied.

Police are still searching for the assailant, described by sources as “heavy-set and in her 40s, with a neck tattoo and buzzcut.”

This sad phenomenon is often referred to as the Bystander Effect, a social psychological theory that states that individuals are less likely to offer help to a victim when there are other people present. I only know this because I embarrassed myself in public in a Game Theory group project in college in exchange for not contributing to the research paper accompanied with it.

I can’t believe I have to say this, but if you see someone punch a two-year-old, say something.