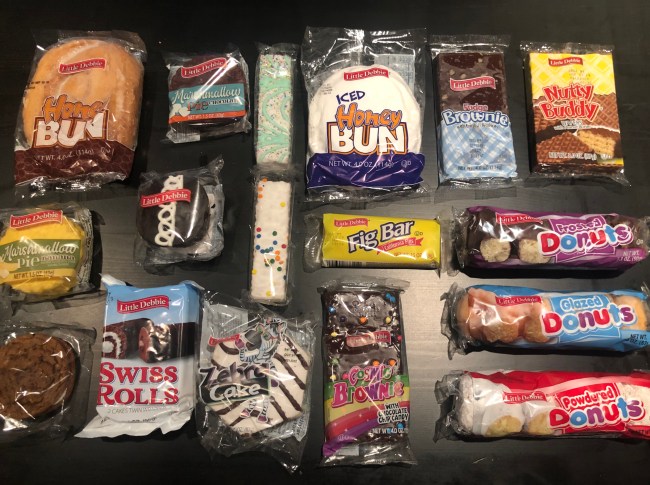 A little over a week ago, I came across a tweet that challenged me to pick one of the many sugar-filled snacks on the market, which is a virtually impossible task as far as I’m concerned.

You only get one for the rest of your life: pic.twitter.com/9BwKvcmhNN

I’ve always had an affinity for Little Debbie—the Tennesee-based brand that has been pumping out a variety of treats since it was founded in 1960—and the tweet gave me an excuse to round up a bunch of their offerings to see which one reigns supreme.

Before we get into the rankings, I should let you know I traveled far and wide around Brooklyn trying to track down as many varieties as possible and—much like Joe Dirt had trouble locating whistlin’ bungholes, spleen splitters, and whisker biscuits—I couldn’t get my hands on Pecan Spinwheels, Star Crunches, Fudge Rounds, and a few other major players.

With that said, here’s my definitive power ranking of the ones I got to taste. 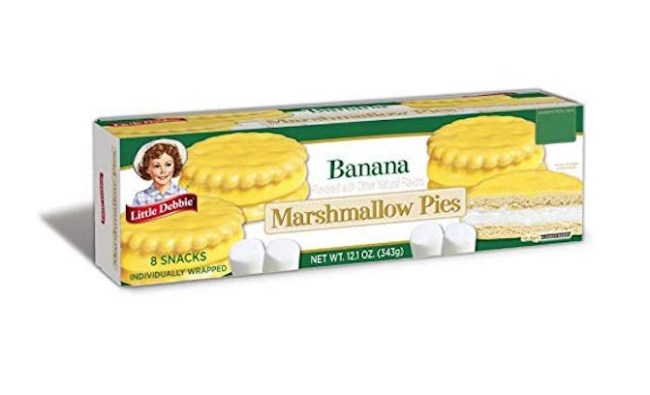 Fun fact: Twinkies were originally filled with a banana cream until the United States experienced a shortage of the fruit during World War II and Hostess pivoted to the creme we know and love today.

I’m not 85 years old so I don’t know what the original Twinkies tasted like, but if it was anything like Little Debbie’s Banana Marshmallow Pie—which is basically a cloyingly sweet and perplexingly spongy Oreo that tastes like a yellow Runt—I can safely say cutting off America’s banana supply was the only positive thing the Axis powers ever did. 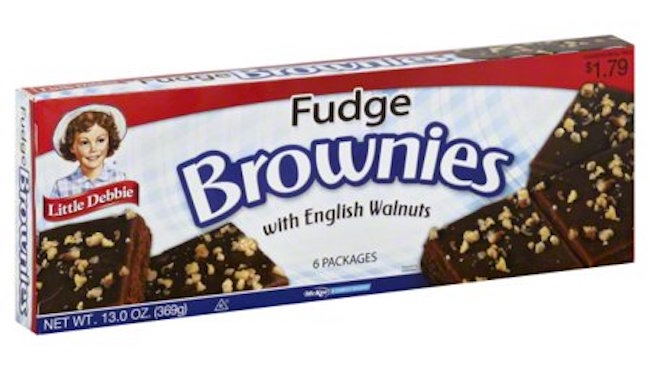 In my opinion, biting into a brownie and discovering it has nuts is the culinary equivalent of walking into your home on your birthday only to discover your friends and family have gathered together to stage an intervention in lieu of surprising you to celebrate your special day.

Of course, Little Debbie is courteous enough to let you know what you’re getting yourself into when it comes to its walnut-filled fudge brownie, and if you are for some ungodly reason a fan of the combination, these might rank a little higher on your list.

However, I am not, and as a result, eating this was like the culinary equivalent of having to go to a meeting with a court-ordered drug counselor. 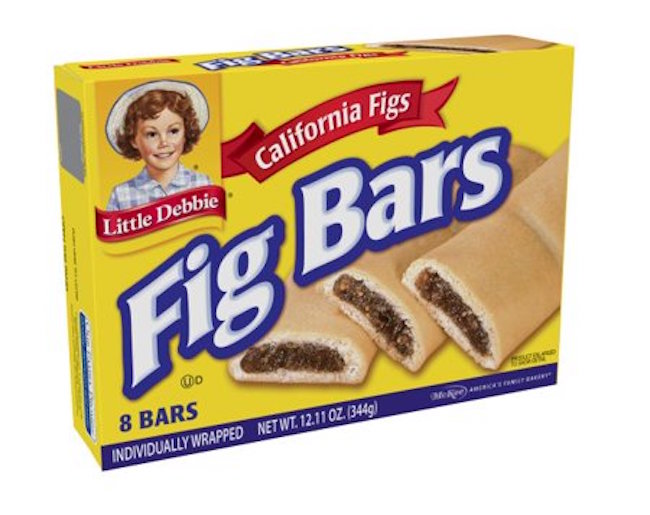 Little Debbie’s answer to Fig Newtons aren’t made with just any figs, my friend. These are Califonia figs, which I assume is supposed to impress me for reasons I’m honestly unaware of.

I made the grave mistake of looking at the nutrition labels before conducting my taste test for this article, and from what I can glean, these are the healthiest option Little Debbie offers unless you somehow possess the self-control to eat a single donut.

Of course, no one eats Little Debbies because they’re trying to be healthy and I won’t find myself eating these again anytime soon.

Fig Newtons are clearly the superior snack, as the dough-to-filling ratio of Fig Bars leaves plenty to be desired. Unlike the Banana Marshmallow Pie, there’s nothing particularly offensive about these but I can think of plenty of other ways I’d rather consume 160 calories. 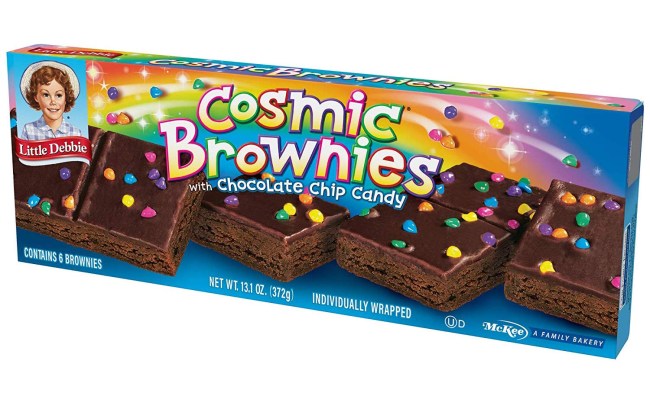 A few weeks ago, I went to Costco and picked up a package of Kirkland Signature protein bars that were supposed to taste like a brownie, but after biting into one, the only real flavor note I could pick up was sadness, which is exactly what I experienced when I sampled this.

In theory, a chocolate brownie covered it in chocolate frosting and topped with chocolate candy sounds delightful but the execution here was about as successful as a malfunctioning guillotine.

So yeah, as far as cosmic brownies are concerned, I would have to say I much prefer the kind that make you want to sit on your couch and listen to vaporwave while watching Enter The Void on mute. 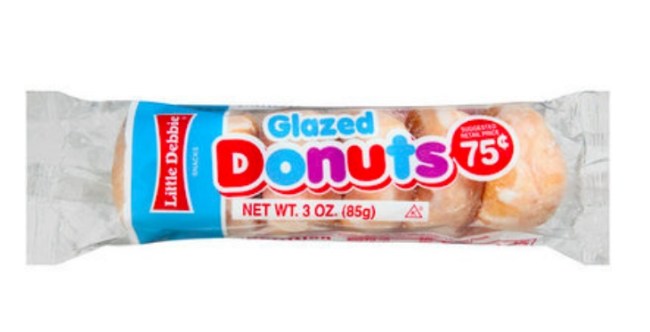 As far as I’m concerned, Krispy Kreme easily takes home the gold medal as far as glazed donuts are concerned and I’m not sure if Little Debbie’s interpretation even comes close to making it to the podium (kind of like Team USA at this year’s FIBA tournament).

The glaze here leaves a lot to be desired; it’s almost like someone filled a spray bottle with simple syrup and lightly spritzed the donut before throwing it into the packaging (only the top of the donut is actually glazed as opposed to the entire thing).

I personally prefer the kind of donut that melts in your mouth but these (as with the case with the other varieties we’ll eventually get to) are doughy and dense, like I was when I was an overweight middle schooler who didn’t understand why I got dumped by the girl I was “dating” because I decided to stay home to play Diablo instead of going to the spring fling.

Sorry about that, Amanda. I hope you’ve forgiven me. 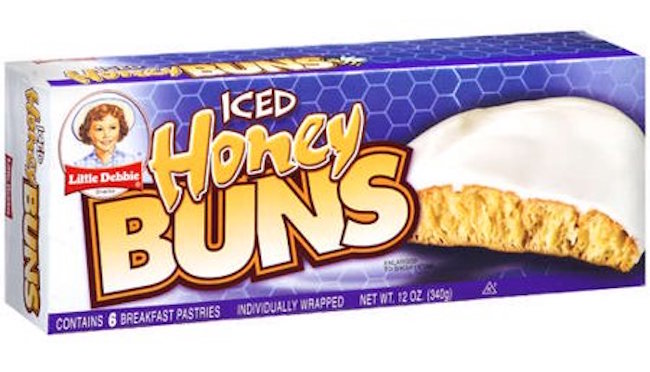 The original Honey Bun (which we’ll talk about in more detail in a little bit) is sweet enough on its own so the addition of icing here is borderline irresponsible. While I might have had a gripe with the prior entry for not having enough glaze, the Iced Honey Bun doesn’t have that problem, which ends up being the biggest problem with it. 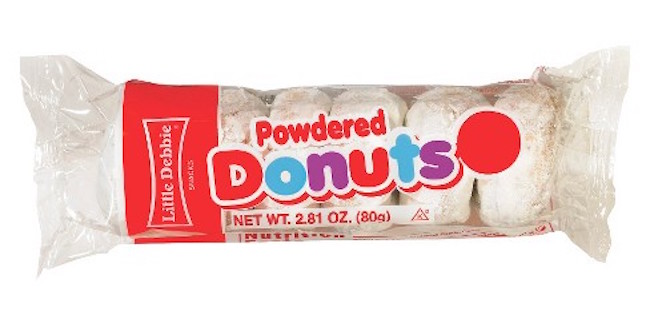 I’m not a huge powdered donut guy, but when I eat one, I want to be able to literally inhale the coating like a high schooler chiefing a Juul in the bathroom stall. I want my lips to resemble Tyrone Biggums and for the surfaces surrounding me to be covered in powder like a Colombian drug den.

My wishes were granted by Little Debbie’s powdered donut, as I only had to eat a couple of them before my desk resembled a mirror on a table at Tony Montana’s mansion and my face looked like the Cocaine Bear meme.

With that said, even the best powdered donuts have trouble overcoming the reality that they’re still a powdered donut. As a result, these are like the Brian Scalabrine of donuts: they’re white and will never have a place in my starting rotation but they’re occasionally good in a pinch. 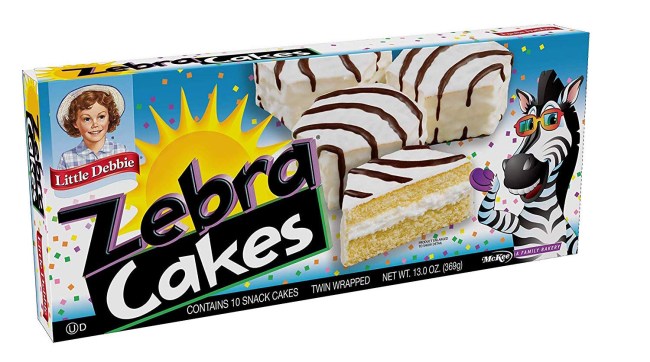 Here’s a fun fact you might not know about me: when I was a kid, I stared diabetes in the eyes by eating an entire pack of Zebra Cakes over the course of a single day, and the next morning, I took a crap unlike any other that I’ve taken in my life—the kind that makes you want to apologize to your toilet for its troubles.

Zebra Cakes are unfathomably sweet to a point where I threw away the wrapper after taking the first bite in order to overcome the temptation to see just how much sugar I’d pumped into my body.

While they may be drizzled in chocolate, it’s virtually impossible to detect, and although the yellow cake holds its own, it’s unable to overcome the overall cloyingness that resulted in Zebra Cakes earning a spot in the middle of the pack. 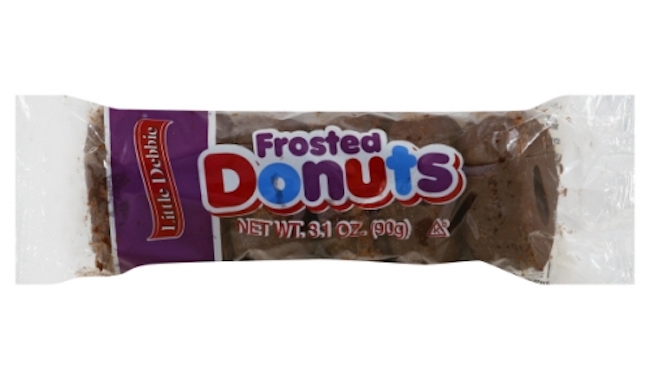 I’ve always had a special place in my heart for Entenmann’s frosted donuts, which my parents bought as a treat on the weekends (assuming I hadn’t been too much of a shithead the week before, which meant I got to eat them far less than I would have liked).

These are the best type of donut Little Debbie has to offer, and while they may have skimped on the coating when it comes to the glazed variety, the same can’t be said for these, which are covered in a satisfying amount of frosting.

Unlike Cosmic Brownies, the chocolate actually tastes like chocolate, which is always a nice bonus. 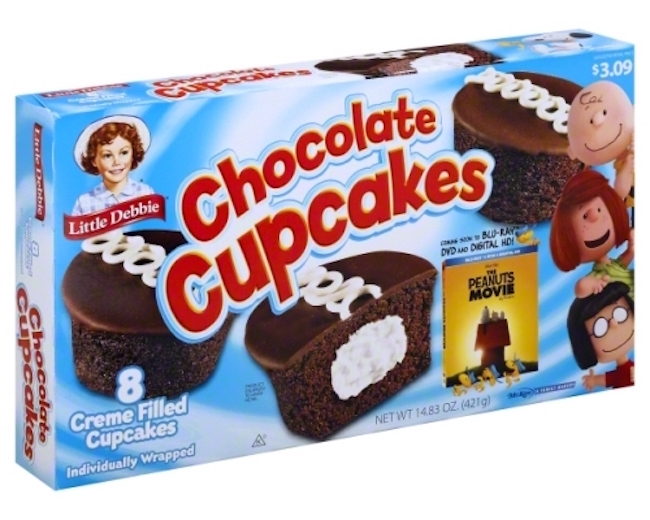 I don’t really have that much to say about these.

The cupcake itself is perfectly moist, but sadly, the picture on the box sits on a throne of lies, as the filling-to-cake ratio is about as lopsided as that of a frat party that doesn’t require dudes to bring girls with them to get in.

This is Little Debbie’s take on a Moon Pie, which is essentially a low-effort S’more.

Unlike the previously mentioned banana-flavored atrocity, this is actually palatable, as it features a generous helping of marshmallow and a solid layer of chocolate.

However, it does lose some points thanks to the cookies sandwiching the filling, which were about as dry as Willy Wonka’s sense of humor in Charlie and the Chocolate Factory. 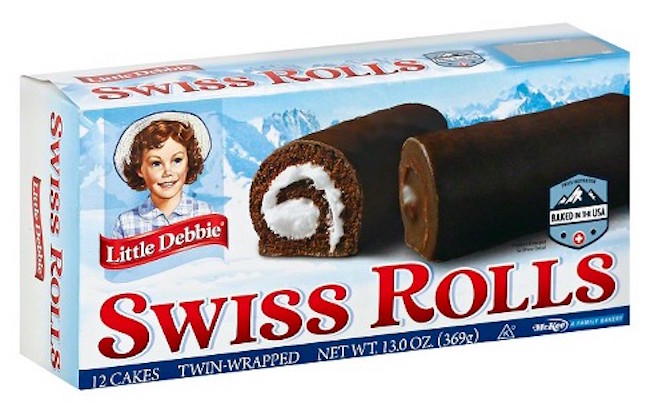 Last year, I got way too into The Great British Bake Off and eventually decided to pick up one of Mary Berry’s cookbooks, which contained a recipe for Swiss rolls and learned that the whole “rolling” thing is much easier said than done.

As a result, I credit Little Debbie for managing to figure out a way to successfully curl the cake, which (unlike the Chocolate Cupcakes) features the perfect amount of creme in the middle.

However, Swiss Rolls lose some points thanks to the chocolate coating, which has the integrity of Lori Laughlin based on how much of it flaked off while I was making my way through the package. 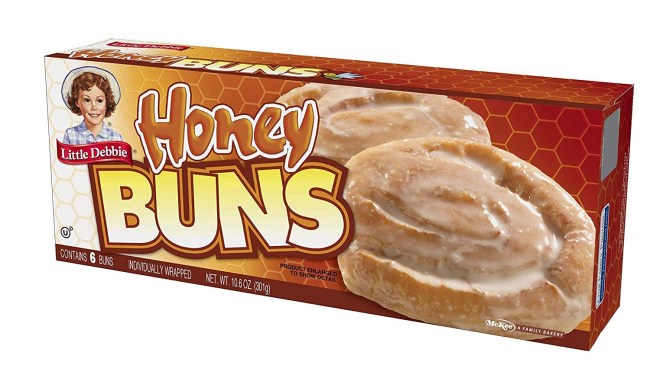 As I mentioned before, Krispy Kreme is the G.O.A.T. when it comes to glazed products but I have to admit Honey Buns give their donuts a solid run for their money—even if they’re in a different category entirely.

I don’t know if “honey” is the best way to describe the flavor here, but regardless, the Honey Bun is a pleasantly sweet, melt-in-your-mouth treat and I ended up eating the entire thing even after looking at the calorie count. 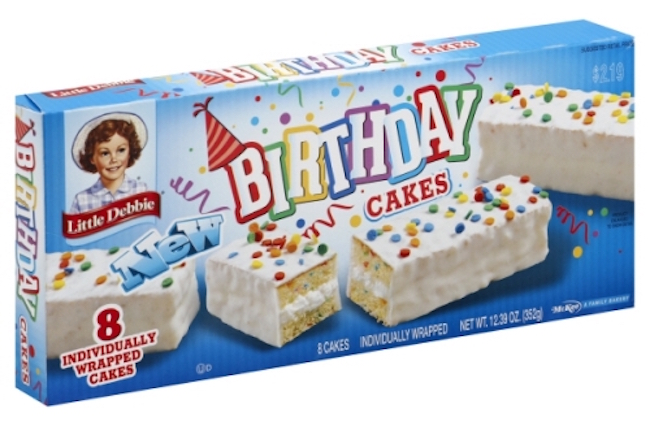 These are basically a Funfetti cake in bar form, which tells you everything you need to know because Funfetti is the bomb and so are these. 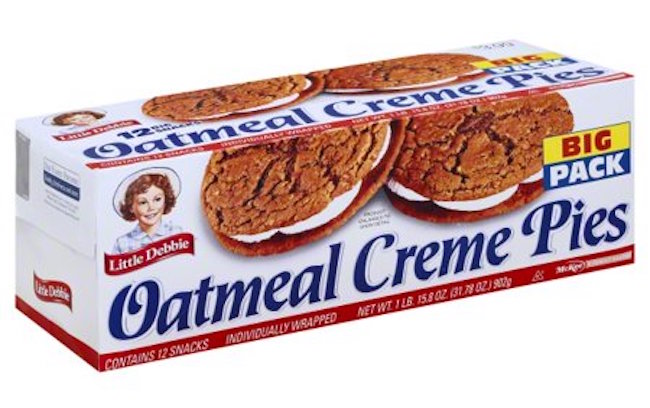 Oatmeal Creme Pies were always one of my favorite Little Debbie snacks when I was younger, but unlike many of the things I enjoyed back in the day (I’m looking at you, Boondock Saints), they still hold up as an adult.

If we were power ranking cookies, oatmeal would probably be near the bottom of the basement but the same can’t be said for these, which—unlike many of the offerings on this list—have a flavor profile that can’t simply be described as “sugar.”

However, none of the prior items even come close to topping the one that took home the gold. 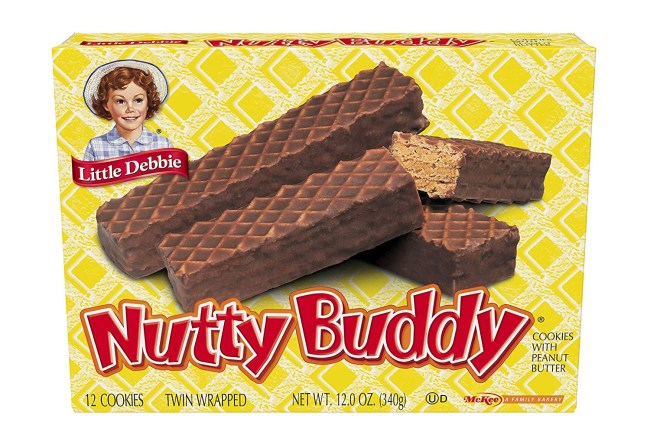 Everyone knows chocolate and peanut butter go together like the sweet, sweet vocals of Christopher Cross and Michael McDonald on “Run Like the Wind,” and if we’re going to stick with the yacht rock analogies, the Nutty Buddy is “What A Fool Believes”—the undisputed champion.