Where Does Run The Jewels Rank Among The Best Rap Duos To Ever Rock The Mic? 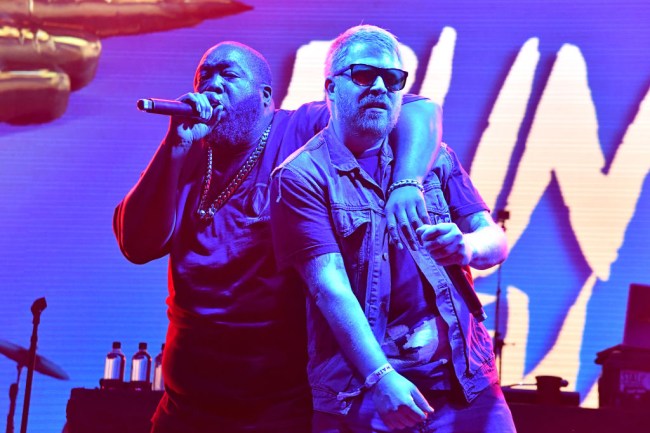 Step into my brain for a moment, if you would be so kind, and start thinking about Run The Jewels.

They’ve been on your mind lately; more so than usual. Run The Jewels 4 is supposed to be coming out at some point soon and “Ooh La La,” which they released recently, is one of the most fun tracks to come out so far this year. The idea of a new album from Killer Mike and El-P is the kind of good news we need right now.

You think about how amazing they are and how they sound like two monstrous bazookas firing one massive shell after another straight into your earholes and deep into the part of your brain that controls the bobbing of your head and the swaying of your shoulders and the tap, tap, tapping of your feet.

You think about how they can get serious, political, introspective, and hilarious and do all of that over the course of the same song. Hell, sometimes they even do that in the same verse.

You think about their power and their coolness. You think about how both rappers seem like they’d be a good hang, and that if you were to be quarantined with any musicians out there today, both of the dudes in Run The Jewels would easily be at the top of the list.

You think about the name “Run the Jewels.” Where the hell did that come from? You check. It’s from an old LL Cool J song? That makes sense.

The guys in Run The Jewels wear the history of hip hop on their sleeves, displaying it proudly like a badge of honor. Even their signature onstage look—black from head to toe—is a nod to those that came before them, as they sought to recreate the visual aesthetic of RUN DMC.

RUN DMC was a trio, though. Run The Jewels is a duo.

You then start to think about the history of duos in hip hop and you wonder where Run The Jewels might rank. They’d probably be somewhere in the backend of the top ten or in the early teens, right?

Well, first you need to see what you’re working with by putting together a list of some hip hop duos, like: Outkast, Black Star, Mobb Deep, EDMD, Eric B. and Rakim, Dead Prez, Public Enemy, Watch the Throne, Method Man and Redman, Blackalicious, and Kris Kross.

Oh, and Gang Starr. You can’t have Kris Kross and forget about Gang Starr.

It quickly becomes apparent that duos in hip hop are everywhere; prominent and very well-represented throughout the history of the rap game. These Run the Jewels fellas (coolness aside) have some stiff competition and it’s much stiffer than you initially thought.

Let’s just get this out of the way: Outkast, Black Star, Gang Starr, and Eric B. and Rakim. That right there is the Mount Rushmore,

A few clicks down the road is a smaller (but still impressive) version of Mount Rushmore. It’s made up of Public Enemy, EPMD, Dead Prez, and Mobb Deep. You’ll have to visit both later, though. National parks are currently closed.

So, is there a world where Run The Jewels could find themselves on that first, much more official Mount Rushmore? Probably not. I’m sure even they would acknowledge that.

It’s hard to dethrone legends, which is what each of those four acts are. Sometimes legacies trump output, and even though the fourth Run The Jewels album is about to drop, it’s hard to measure up to Black Star, whose sole album still looms large thanks to how timeless it is.

Hearing Mos Def and Talib Kweli team up might not seem as big and exciting now as it did in 1998, as the passage of time has pushed them down a few rungs on the zeitgeist ladder. With that said, if we become prisoners of the moment and slaves to recency bias, we could very well be lost forever. Making choices and decisions based on something being out of sight and out of mind—much like being fat, drunk and stupid— is no way to go through life, son.

With that said, if any duo’s spot on Mount Rushmore was even a bit shaky, it would be Black Star’s. The other groups aren’t going anywhere (but we’ll explore were Black Star could end up in just a bit).

You do wonder, though, what would need to happen for Run The Jewels to grab that spot? Can they even dethrone any of the acts on the smaller (but still impressive) version of Mount Rushmore?

Yes, they probably can. But who?

Public Enemy? No way. Not Chuck and Flav. Public Enemy is one of the most influential and impactful musical acts ever. Ill-advised publicity stunts aside, you can’t mess with that résumé—until you take a closer look and realize it’s been misrepresenting itself.

Public Enemy is not a duo. It’s true. Public Enemy feels like a duo because most people associate them with Chuck D and Flavor Flav. However, they’ve also had DJs in the group including Professor Griff, DJ Lord, and Terminator X.

We’ve been misled, friends. Public Enemy should not be in the running for either of these Mount Rushmores. So, take a giant jackhammer to them and turn your attention to Mobb Deep, Dead Prez, and EPMD, all legendary duos made up of seasoned veterans. This is where things get tricky.

This is where you find yourself twisted into knots and wondering if you can put a group like Run The Jewels ahead of one like EPMD, which Killer Mike himself cited as an influence. If one group paved the way and laid the tracks for another, conventional wisdom would say that the trailblazers should be ranked ahead of that which follows in its wake.

Hold up, though. EPMD isn’t defunct! Erick Sermon and Parrish Smith are still recording and touring so you could actually line them up against Run The Jewels after all. Game on, gents.

The same can’t be said for Mobb Deep. Sure, Havoc has continued recording under that name since Prodigy died in 2017 but, you know, if half of the group isn’t there anymore, it’s hard to keep using that label.

I’m looking at you, The Who.

I feel like Mobb Deep and Dead Prez are in the same boat. Both are beloved by serious heads yet neither really broke out into the mainstream—nevermind reached the point of headlining a gathering like Coachella. While Run The Jewels also hasn’t done that (yet), they have made it to the second line of a festival poster, which is more than Mobb Deep or Dead Prez can say.

Does that matter? Does anything matter? Both valid questions and ones we’re asking ourselves more and more in recent weeks. However, I say Mobb Deep and Dead Prez are locks for the smaller (but still impressive) Mount Rushmore.

We do still have some construction to do and that’s going to require pulling a Face/Off and swapping Black Star with EPMD on their respective monuments.

It might be controversial, but based on their legacy, track record, and overwhelming sphere of influence, EPMD is moving down the road to the first Mount Rushmore. It makes sense. It just feels right. Having Run The Jewels move past them at this stage of the game seems premature (but things could change in the future).

So, if the world were to end in the next week or so (something that seems increasingly likely with each passing day), a Mount Rushmore of Great Hip Hop Duos comprised of Outkast, Gang Starr, Eric B. & Rakim, and EPMD is the right choice. All four are icons and legends whose work has gone on to inspire countless artists (including Run The Jewels.)

With that settled, it leaves the smaller (but still impressive) one a short drive away that boasts Mobb Deep, Dead Prez, Black Star (in that order) in addition to, yes, Run The Jewels.

They get that final spot for good reason and those other three duos should be well aware of their footsteps. Run The Jewels is a wrecking ball that shows no intention of slowing down anytime soon, as Killer Mike previously told Snoop Dogg that “there’s going to be Run The Jewels ’till the wheels fall off.”

You smile. You sit back. You know all too well that given the drive and creative output of El-P and Killer Mike, the wheels underneath Run The Jewels are locked in and on tight. They aren’t going anywhere.