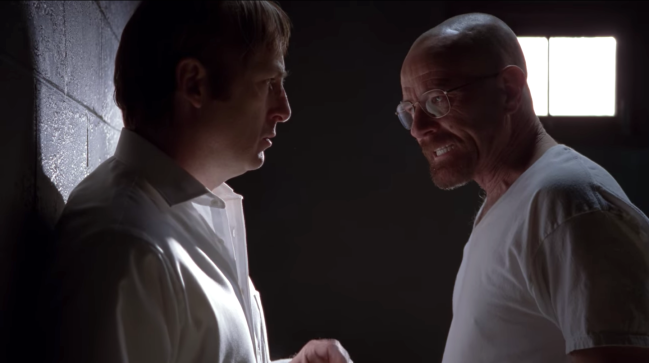 After looming over the series like a lung cancer-riddled storm on the horizon, Bryan Cranston’s legendary Walter White finally made his Better Call Saul debut in the sixth and final season of the hit prequel series by appearing in a couple of episodes down the stretch.

Warning: this article will include spoilers for “Saul Gone”, the series finale of Better Call Saul

Having first appeared a few weeks ago in the third-to-last episode — conveniently titled “Breaking Bad” — as the season two, rookie drug dealing version of Walter White, Cranston again returned as Heisenberg for one last scene in the Better Call Saul finale.

Only this time, it was as the ranting, raving, borderline deranged version of the infamous meth kingpin we see in the final episodes of Breaking Bad following the death of Hank Schrader and Steve Gomez.

Given that Cranston has been wowing audiences as Walter White for over a decade now, you’d think the novelty of his performance would have worn off by now. But it hasn’t. Cranston remains as mesmeric as ever as White, as evidenced by what could be his final time playing the part in “Saul Gone.”

Bryan Cranston is on a different level.

The way he’s so easily able to slip back into this *particularly* unhinged version of Walter White so seamlessly… Uncanny.#BetterCallSaul

All the feels with this @BetterCallSaul finale. Seeing my awesome tv wife @betsy_brandt @BryanCranston damn just all the feels

"SO YOU'RE ALWAYS LIKE THIS?" THIS! Ladies and gentleman, the 2 different types of ego that we see everyday. And how the hell after everything, he's still the obsessive, egomaniac, Patronizing **hole? Bryan Cranston NEVER DISAPPOINT #BetterCallSaulFinale pic.twitter.com/GQD5Y7pKnf

#BetterCallSaul
Thank you for bringing Bryan Cranston in the last episode. He came as a gentle touch to a head heavy with aches. pic.twitter.com/3LaoIqGD0n

Bryan Cranston is such an amazing actor man. It’s like he never left the role

If the Better Call Saul finale was truly the last hour that television fans get to spend in the Breaking Bad universe, its certainly a worthy send-off as the episode was not only emotionally and narratively satisfying, but it included appearances from Cranston’s White, Rhea Seehorn’s Kim Wexler, Johnathan Banks’ Mike Ehrmantraut, Betsy Brandt’s Marie Schrader, and Michael McKean’s Chuck McGill.

RELATED: TV Fans Are Demanding That Rhea Seehorn Win All The Awards Following Her Powerhouse Performance As Kim Wexler In ‘Better Call Saul’