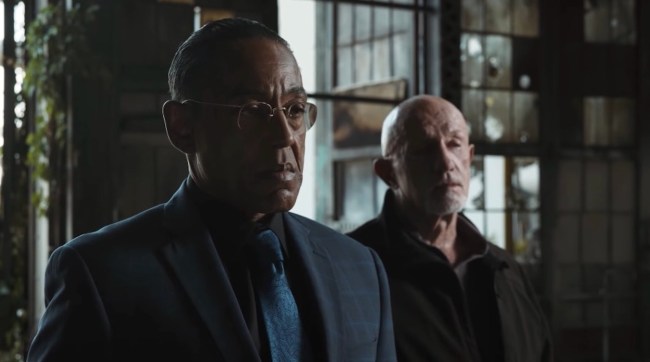 Just look at the photo above this. Soak it in. Wrap your mind around what a complete and utter flex that is: Gus Fring and Mike Ehrmantraut standing front and center looking pissed as hell. An iconic television image in any context. It’s further evidence that the Breaking Bad universe is further bleeding into Better Call Saul‘s, which means that Jimmy McGill is now finally becoming Saul Goodman.

At the end of season four, fans finally saw the criminal lawyer openly embrace his dark side and metaphorically announce the arrival of his criminal lawyer alter-ego Saul Goodman. For a series that has made its name on being a slow and intricate burn, it was a defining moment that marked the beginning of the endgame for the series.

Despite the fact that season five on the horizon and a sixth and final season has been confirmed, AMC has been understandably mum when it comes to the upcoming episodes, as they’ve yet to release a full official trailer.

Now with less than a month until the season premiere, AMC has released the first in-depth look at the upcoming season that features clips from the upcoming episodes in addition to interviews with the cast.

Not that this is necessarily going out on much of a limb, but with only two seasons remaining, I think this’ll be the one that finally has either Walter White or Jesse Pinkman pop up in some capacity.