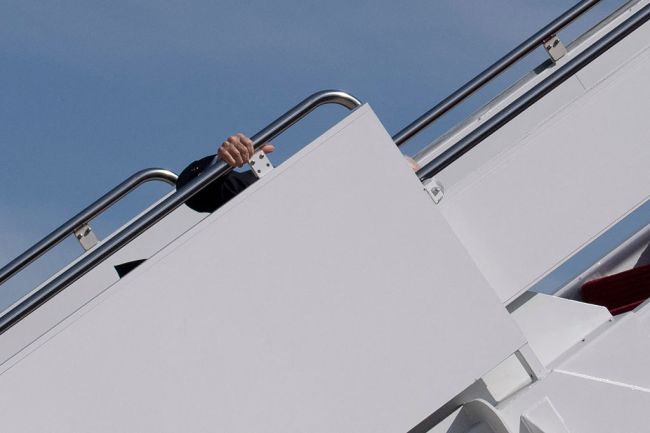 We’ve all been there. You’re trekking up the stairs and the tip of your sneaker doesn’t quite clear the top of the step and immediately halts all of your momentum. You end up tripping UP the stairs. When it happens to us, we blame a new pair of sneakers that aren’t broken in or that seventh hard seltzer that we probably didn’t need. But when the President of the United States trips up the stairs, the entire world is witness.

President Joe Biden was boarding Air Force One on Friday morning, when he fell not once, not twice, but three times. The 78-year-old Biden, who is the oldest person ever elected as POTUS, lost his footing while stepping up the red carpet stairs while boarding Air Force One at Joint Base Andrews in Maryland for a flight to Atlanta.

Thankfully, Biden “is doing 100 percent fine” after the spill, according to the White House.

The internet does what it does – turn everything into a meme.

There was color commentary of Biden’s fall.

It had to be done. pic.twitter.com/7PsDHGKbiC

Biden later getting off that plane. pic.twitter.com/Ipq0V8YAv5

Biden has been president for two months and already he's taken more trips on Air Force One than Trump did in four years.

I added music to Joe Biden falling up the stairs to Air Force One. pic.twitter.com/3mHuaWUWh7

No one is safe from the NFL's rushing leader #Bidenfall pic.twitter.com/0ppvftH47N

BREAKING: Jason Derulo has fallen down the steps of Air Force One, knocking over President Joe Biden! pic.twitter.com/0eOfydFw61

Donald Trump Jr. got into the action by sharing a video of former President Donald Trump taking aim with one swing of the golf club.

It wasn’t the wind folks. pic.twitter.com/jYc01dBZCe

Some Twitter reactions recalled Biden’s comments from last September when he made fun of Trump for walking slowly down a ramp.

FLASHBACK: Remember when Joe Biden tried to make fun of Donald Trump for slowly walking down a ramp? We do. pic.twitter.com/5vbZKih2GD