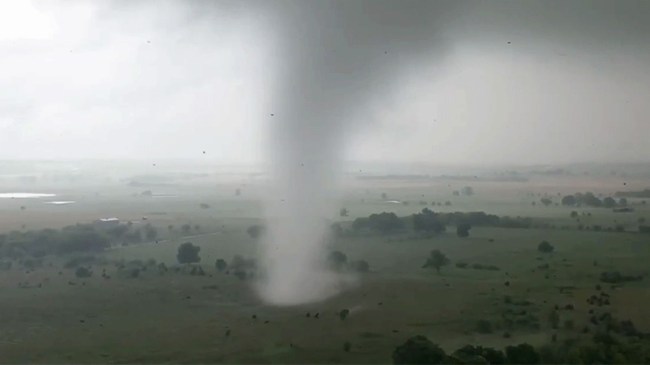 This video of a twister is the extreme. It’s the EXTREME! While there are no flying cows in the video, it is pretty freaking mesmerizing. Some tornado chasers in Sulphur, Oklahoma were able to track down a twister and record some extraordinary footage of a tornado. Thank goodness for everyone involved that there weren’t any flying cows or that it wasn’t an F5 tornado, which is of course the finger of God.

WXChasing, a YouTube account “documenting mother natures most extreme weather,” tracked down a twister and instead of getting in the tornado’s path wisely used a drone to film the power of the tornado.

The extreme weather trackers captured incredible aerial footage of the scary-looking twister that devours trees on the ground and forms a waterspout over a pond. Thankfully, nobody was injured and no real property damage occurred during the tornado’s rage.

WXChasing has driven into extreme conditions and shown how inclement weather has impacted the area including heavy downpours, flooding and frightening thunderstorms.

In other WXChasing videos, they have documented the damage of previous tornadoes and other extreme weather.

The account has even captured the aftermath of Hurricane Michael in Panama City, Florida.