Bill And Ted Return In The First (EXCELLENT!) Trailer For ‘Bill and Ted 3: Face the Music’ 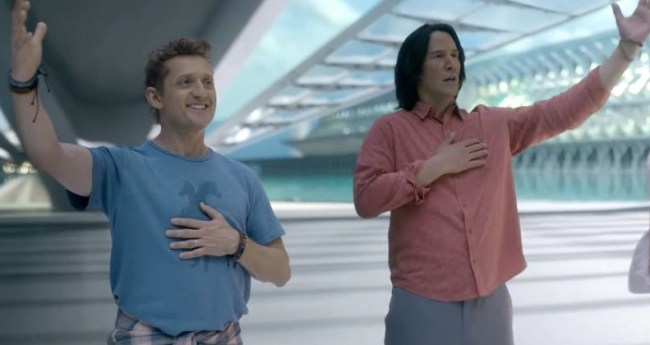 The first trailer for Bill and Ted 3: Face the Music is here!

Bill and Ted 3: Face the Music sees Keanu Reeves and Alex Winter return to the roles of Ted Logan and Bill Preston, the weed-smoking, guitar-shredding duo that was last seen in 1991’s Bill & Ted’s Bogus Journey, which was a sequel to the original 1989 stoner comedy Bills & Ted’s Excellent Adventure.

Here’s the official synopsis for Bill and Ted 3: Face the Music, followed by the first trailer:

“Now enduring the monotony of middle-aged life, William “Bill” S. Preston, Esq. and Theodore “Ted” Logan are warned by a visitor from the future of the need for them to create a song in 78 minutes that will save all life on Earth and the entire universe. The pair work with their families, old friends, famous musicians, and each other to complete the task.”

There’s a part of me that chuckles at the idea of Gen Zer’s waking up this morning and finding out that Keanu Reeves hasn’t always been solely an action movie hero — in fact, the original Bill and Ted film was one of Reeves’ first major starring roles.

In addition to Reeves and Winter, William Sadler is set to reprise his role as the Grim Reaper, while Brigette Lundy-Paine and Samara Weaving will appear as Ted’s daughter Billie Logan and Bill’s daughter Thea Preston. Additionally, rapper and actor Kid Cudi is has also been confirmed to appear in the film.

Bill and Ted 3: Face The Music is set to hit theaters on August 21.