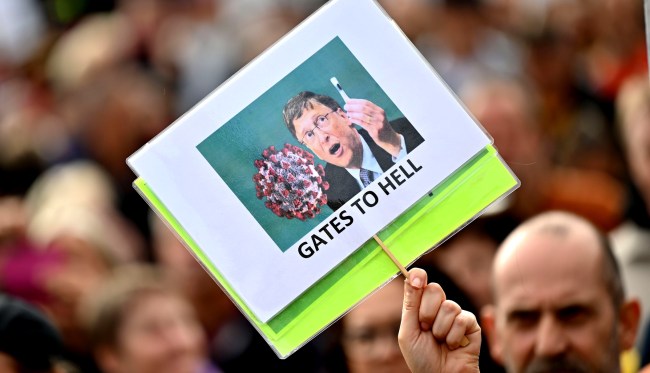 Have you heard the one about how the coronavirus pandemic is being used by Bill Gates to implant chips into Americans’ brains?

That’s right. There is a widespread conspiracy theory that the Microsoft co-founder turned billionaire philanthropist is using coronavirus patients as his own personal guinea pigs.

Bill Gates money does not give him permission to control, and rule the world with vaccines! https://t.co/BHHvfQFl4F

The conspiracy theory not only claims Gates is using coronavirus treatments to track people, but that he also somehow patented the virus itself.

During an appearance on The Daily Show with Trevor Noah on Friday, Gates addressed those theories and talked about where we currently stand with regard to getting a handle on the pandemic with a vaccine.

“Usually when you work on infectious disease, like Dr. Fauci and I do, you’re kind of obscure,” Gates told Noah. “Nobody talks that much about TB or malaria. So here we have this complete turnaround where vaccines, and are they good for people, are now front and center.

“And there’s always been a small group of anti-vaccination people, and we see this with the measles vaccine. They’ve now got a platform and they’ve joined forces with some political-conspiracy views.

“And it’s so easy to click on, particularly when a simple explanation for this pandemic — that there is somebody evil behind it — is somehow easier than the true biology, which is actually kind of complicated. So we have to make the truth more interesting and we’ve got to label things with the truth. And, sadly, the naivete about how to make social media work well is pretty strong, and that’s coincided with the election and the epidemic.”

Gates understands the frustration, however, noting, “With the winter, when we’re colder, the virus multiplies more when we’re indoors more, so that’s not a good thing. And then there’s a certain fatigue — some of the things people have to do, in terms of staying away from friends, that’s tougher.

“For the next six to eight months, the news [will be] mostly bad. After that, the volume of the vaccine will have kicked in, and there’s light at the end of the tunnel.”