Bill Gates Claims There Could Be A ‘Substantial’ Death-Rate Reduction From Coronavirus By Year End, Calls Current Testing ‘Complete Waste’ 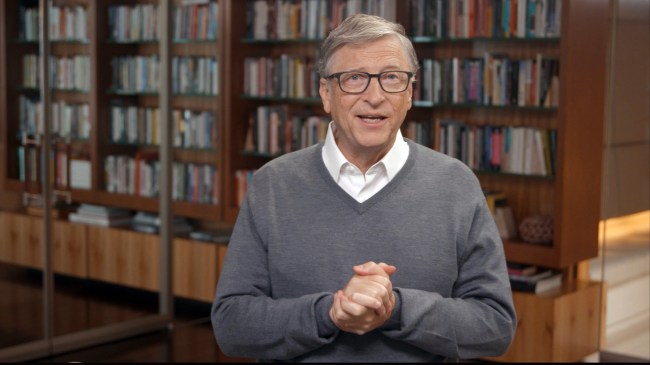 Billionaire philanthropist Bill Gates is optimistic that therapeutic drugs to treat the coronavirus could severely stunt the death rate at year end.

“You can see the therapeutic benefit faster than the protective benefit,” Gates said in an interview that aired Tuesday on CNBC’s “Squawk Box.” “So I think there’s a good chance we’ll have substantial death-rate reduction by the end of the year with the combination of those new tools.”

Gates, who pledged $100 million to vaccine research and treatment efforts in February, claimed the antiviral drug remdesivir is one of the leading treatments in therapeutic research. The drug, a product of Gilead Sciences and administered through an IV, has shown to have reduced the risk of death for very sick coronavirus patients by 62% compared with standard care alone, CNBC reports. Gates also claimed that there are two other oral drugs that scientists see promise in.

"You should not reimburse somebody for getting a test that it takes more than 48 hours to get the result back. That test is a complete waste," says @BillGates. "You need to get it back as soon as possible so that somebody can change their behavior." pic.twitter.com/sIClPJ334F

Fellow billionaire Elon Musk, on the other hand, is so unworried about the pandemic, I’m surprised he wasn’t at the Chainsmokers concert in the Hamptons.

In March, Musk tweeted this:

The coronavirus panic is dumb

In April, he called shelter-in-place measures  “fascist” during a Tesla earnings call before calling upon governments to “give people back their freedom.”

Musk told Joe Rogan in May that he thinks the reaction to coronavirus “has taken over the mindspace of the world to a degree that is quite shocking,” and claimed people “really wanted the panic.”

In an interview with the New York Times this week, Musk reaffirmed his position:

Bill Gates, who in 2018 predicted a global pandemic that could kill 50 million people, called Musk’s comments about COVID-19 “outrageous.”

“Elon’s positioning is to maintain a high level of outrageous comments,” Gates said to CNBC. “He’s not much involved in vaccines. He makes a great electric car. And his rockets work well. So he’s allowed to say these things. I hope that he doesn’t confuse areas he’s not involved in too much.”

“When you let people communicate, you have to deal with the fact that certain incorrect things that are very titillating can spread very rapidly compared to the truth. And we’ve always seen that with vaccines,” Gates, who’s been the subject of conspiracy theories, told CNBC. “To the degree to which these media companies can see what’s being said on their platform and take things that are absolutely wrong and get rid of those things or slow those things down, that’s very tough.”

I think I’ll side with the guy who has dedicated his life to finding cures for disease.