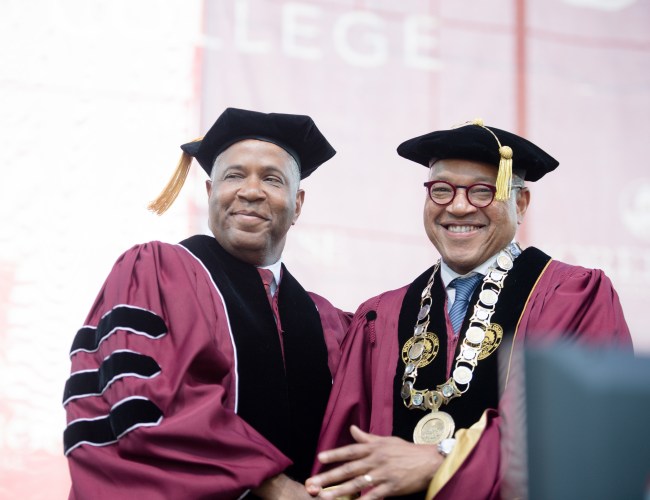 It’s Graduation SZN across the nation with college students throwing their caps in the air and heading off into the real world, many searching for their first entry-level (or high-paying) salary while being bogged down with crippling student debt.

At the Morehouse College graduation ceremony, commencement speaker Robert F. Smith shocked the crowd in a way that nobody could’ve ever imagined. Billionaire Robert F. Smith is the wealthiest black man in America (richer than Oprah too), according to the Washington Post. Last year, he was ranked as the 168th wealthiest person in America thanks to a fortune built on investment banking which led him to found the private equity firm Vista Equity Partners of which he’s still Chairman and CEO. That firm operates with over $10 billion in their fund (as of 2016).

Robert attended Cornell undergrad and Columbia Business School but as the commencement speaker at the historically black Morehouse College over the weekend, he felt so compelled by the moment that he announced his family would erase all of the student debt of the 2019 graduating class in a moment that absolutely shocked the crowd.

"My family is going to create a grant to eliminate your student loans!" -Robert F. Smith told the graduating Class of 2019 @RFS_Vista #MorehouseGrad2019 pic.twitter.com/etG8JhVA46

The gift is estimated to be worth $40 millionhttps://t.co/0K6InCKtzs

The gift that Robert Smith just gave Morehouse’s graduating class is simply awesome. The freedom you have from that right out of college, especially from the House (private school). Man, what a blessing that is

This guy’s reaction completely steals the moment and I love everything about it. I hope to see this meme on the Internet forever because it comes from such great origins.

This is dope!! 🙌🏾🙌🏾🤣🤣 His reaction is priceless!!! pic.twitter.com/asUzBqB0LV

This is, without a doubt, the most baller move ever pulled at a college graduation and it’s not even close. He just pledged to spend $40+ million to positively change the lives of the next generation of college graduates. Instead of entering the workforce having to pay off debt while trying to stay above water they’re now afforded freedoms nobody could’ve imagined this time last week.

That’s ~400 graduating seniors, all with advanced education degrees, none of whom have student debt now. For more on this story, you can click here to check out the Twitter Moments roundup.