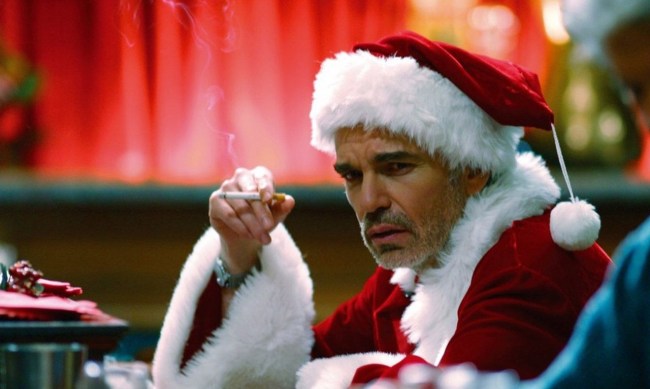 Billy Bob Thornton, currently starring on Amazon Prime Video’s Goliath, admitted that he was, in fact, drunk during the filming of the 2003 Christmas classic Bad Santa.

“I do have a Method actor aspect to myself,” Thornton told Couch Surfing host Lola Ogunnaike as they watched one of the most infamous clips from Bad Santa.

Ogunnaike replied that she had heard a few things and would it if he would confirm some of them.

“I was drunk in that scene. And it’s so obvious… I drank about three glasses of red wine for breakfast… that was just an appetizer. Then I switched over to vodka and cranberry juice, and then I had a few Bud Lights. By the time I got to that scene there, I barely knew I was in a movie,” Thornton admitted.

“The fact of the matter is I was supposed to be standing up on the escalator when I got dumped off up there,” he continued. “It dumps me out up there on the floor at the top of the escalator and it literally woke me up. It woke me up and that’s what’s in the movie. And I get up, and I was standing around for a minute and I was like, ’cause I thought I woke up in my house, and then I remembered what I was supposed to do. I was supposed to go there and fall down in all those gifts and be horrible in front of the kids. You know… at least it wasn’t a monologue.”

Back in 2016, Thornton admitted to the New York Times, “A couple of times, I was drunk, but not every day. I showed up with a hangover a few times. There were times when I’d be with my pals until 3:30 a.m. and have to be at work at 7 a.m. I wasn’t the most pleasant guy to be around.”