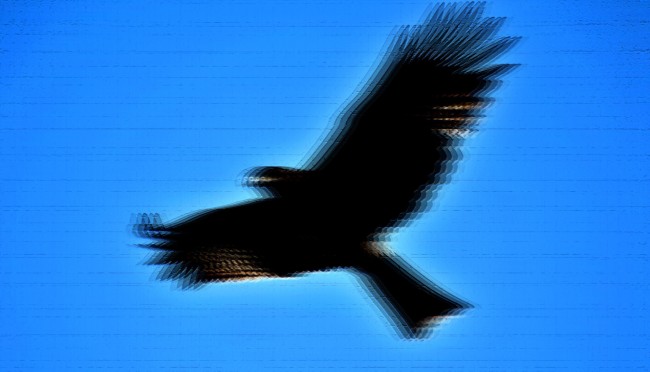 On Monday, we leaned about a mind-blowing new theory regarding aliens that while unprovable (at the moment), certainly would explain all the recent UFO sightings and how aliens, who aren’t really aliens, could be living amongst us unnoticed.

Today, we have evidence that there is something very odd going on in Gallup, New Mexico that requires some serious explanation from people with higher government clearance than us.

A video shared on Facebook by a woman named Kayleen Bowman appears to show a bird hovering in mid-air completely motionless with its wings extended.

“The other morning Jay was taking Lilly to school,” Bowman wrote. “Lilly said, ‘Look that bird is frozen!’

“Jay stopped the car to see what she meant. They saw this crow ‘frozen’ in the sky. Looks like it was in the middle of flapping its wings.

“Jay said you can see the beak moving. This still boggles my mind. What do you think?”

Now I have watched the video way more times than I probably should have, and for the life of me, I cannot tell how this was done. Because if you look at the lower right corner of the video you can see that the camera is being moved and yet the bird… is not. Perhaps the reason for this is so obvious that I am just overlooking it. Lil help?

Commenters on the video offered several possible explanations including…

“Portal? 5g messing with the birds? Prof [sic] we live in a giant bubble?”

“Exe.spybird has stopped working.” And “Looks like theres a glitch in the matrix.”

Bowman said that after she saw the video she “couldn’t believe it when they told me but after I saw the video, I didn’t know what to think.”

Others wondered why they didn’t get out of the car, throw something at it, or shoot a close-up video of the bird. All very, very valid questions.

According to Bowman, “This is by the train tracks in Gallup when you’re heading south. Right next to the lumber place I think. I forgot what those buildings are called next to Cash Cow furniture.”

So if you’re ever in the area you might want to have your tin foil hat handy. Just sayin’…

More unsolved mysteries…
• New documentary provides a very strong argument that aliens exist and are living among us
• Glowing UFO spotted on NASA live stream of the Space Station sparks more claims aliens are real
• Britain’s first astronaut says aliens definitely exist and they could already be among us
• UFO expert says glass dome inexplicably levitating over meteorite in Russia may have released alien tech
• Navy pilot who filmed USS Nimitz UFO encounter breaks his silence after 15 years
• Top researchers claim U.S. military is covering up their own super advanced aircraft by making people believe it is a UFO
• Mysterious hovering orbs over Mesa have many believing they spotted a glowing UFO
• UFO seen by 100+ people hovering in the California sky for five minutes sparks alien concerns
• A stationary UFO recorded in the South Carolina sky sparks secret government surveillance theory
• Former head of MI6, who’s allegedly part of a secret global conspiracy on UFOs, says he believes aliens do exist
• UFO expert claims ISS video is ‘100% proof’ NASA, Russia know aliens visit the space station
• Bug expert declares there are insects on Mars and then suddenly deletes research after backlash
• UFO expert claims to have video proof of a fleet of alien spaceships passing by our moon
• 5 Navy veterans and new anonymous source who witnessed the USS Nimitz UFO incident come forward to reveal what they saw
• Retired Air Force Major says a space alien was shot and killed at a base in 1978, government covered it up
• US Navy pilot David Fravor who claims to have witnessed a UFO says the tapes of the encounter have disappeared
• Eyewitnesses spot identical fleet of UFOs in the sky over Utah and North Carolina in the same day
• UFO expert says he has ‘100% proof’ that aliens currently live in a ‘city’ on our moon
• Red triangular craft recorded hovering in the Texas sky is perhaps the ‘clearest UFO footage’ ever
• Top Gun Navy pilot describes his incredible UFO encounter on ‘The Joe Rogan Experience’
• A strange ‘fleet’ of 14 glowing UFOs was spotted and caught on camera off the coast of North Carolina