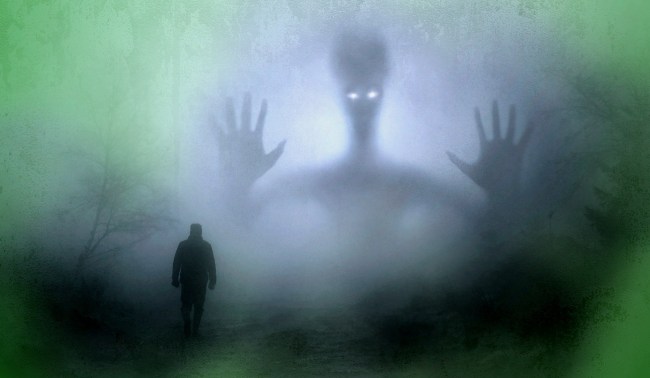 Everyone agrees that extraterrestrial aliens are real, right? RIGHT? Okay, so, all we need is for someone, anyone to actually prove it or for the United States government to finally admit it.

Until then it’s up to us regular folk to keep forging on, investigating and questioning everything.

Thankfully, people like those over at 1091 Media have our backs by researching and producing eye-openers like the upcoming film The Phenomenon, “the first high-production-value documentary to assemble the pieces of the UFO puzzle into a startling, up-to-the-minute picture, peering into 70 years of history right up to fresh discoveries that challenge everything we think we know.”

Releasing in theaters nationwide in September, The Phenomenon, directed by James Fox and narrated by legendary actor Peter Coyote, “opens by proving there is a shocking ‘hidden history’ that began in the late Forties and Fifties, when fleets of UFOs appeared in the skies over nearly every state in the U.S., culminating in a flyover of Washington D.C.”

The rest of the film will unveil “never-before-seen archival footage” and feature new interviews with eyewitnesses, experts and officials including Senate Majority Leader Harry Reid – who producers claim arranged secret government funding of UFO study programs, White House Chief of Staff for Clinton and advisor to Obama John Podesta, former U.S. Energy Secretary and New Mexico governor Bill Richardson – who believes it is likely that an alien spaceship did, in fact, crash in Roswell, and many more insiders.

“Twenty-five years into investigating unidentified aerial phenomena, I’m faced with the unavoidable fact they’re real, they’re global, and we’re potentially dealing with a form of consciousness that shares our world and impacts our lives in powerful ways,” the film’s director says about the project in a press release. “Our team has assembled the most compelling testimony and evidence from around the world that will lead even the most ardent skeptics to the inescapable conclusion that we are not alone.”

Take a sneak peek at The Phenomenon and learn more about what to expect from the film in its first trailer below.

With people like those at 1091 Media on our side, it’s just a matter of time before all the UFO and alien secrets that have been withheld for decades are revealed because, as we are well aware…

Further evidence…
• Glowing UFO spotted on NASA live stream of the Space Station sparks more claims aliens are real
• Britain’s first astronaut says aliens definitely exist and they could already be among us
• UFO expert says glass dome inexplicably levitating over meteorite in Russia may have released alien tech
• Navy pilot who filmed USS Nimitz UFO encounter breaks his silence after 15 years
• Top researchers claim U.S. military is covering up their own super advanced aircraft by making people believe it is a UFO
• Mysterious hovering orbs over Mesa have many believing they spotted a glowing UFO
• UFO seen by 100+ people hovering in the California sky for five minutes sparks alien concerns
• A stationary UFO recorded in the South Carolina sky sparks secret government surveillance theory
• Former head of MI6, who’s allegedly part of a secret global conspiracy on UFOs, says he believes aliens do exist
• UFO expert claims ISS video is ‘100% proof’ NASA, Russia know aliens visit the space station
• Bug expert declares there are insects on Mars and then suddenly deletes research after backlash
• UFO expert claims to have video proof of a fleet of alien spaceships passing by our moon
• 5 Navy veterans and new anonymous source who witnessed the USS Nimitz UFO incident come forward to reveal what they saw
• Retired Air Force Major says a space alien was shot and killed at a base in 1978, government covered it up
• US Navy pilot David Fravor who claims to have witnessed a UFO says the tapes of the encounter have disappeared
• Eyewitnesses spot identical fleet of UFOs in the sky over Utah and North Carolina in the same day
• UFO expert says he has ‘100% proof’ that aliens currently live in a ‘city’ on our moon
• Red triangular craft recorded hovering in the Texas sky is perhaps the ‘clearest UFO footage’ ever
• Top Gun Navy pilot describes his incredible UFO encounter on ‘The Joe Rogan Experience’
• A strange ‘fleet’ of 14 glowing UFOs was spotted and caught on camera off the coast of North Carolina