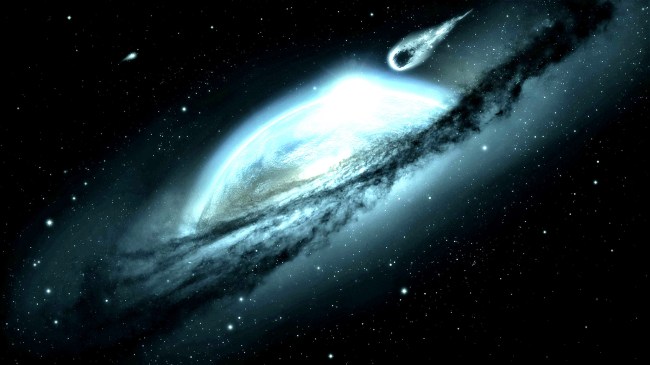 The 500-kilogram fragment, which came from a meteor that disintegrated over the city of Chelyabinsk, Russia in 2013, is on display at the Chelyabinsk museum of South Ural history.

According to the Moscow Times, when the large space rock smashed into Earth it created shockwaves that shattered windows and caused injury to several hundred people.

In the museum’s surveillance video, the glass dome covering the meteorite spontaneously rises up slowly, pauses, then rises a little more before returning back down to its normal position.

Museum director Vladimir Bogdanovsky told the RIA Novosti news agency that while the dome lifting up on its own could have been a technical malfunction, the only remote control that raises and lowers it was locked inside a box that’s under video surveillance.

“We have no explanation as to who gave the command and how it happened,” said Bogdanovsky. “The fact remains, but we can’t explain it yet.”

One person who does have a possible explanation is UFO and alien expert Scott Waring, who wrote on his website about the mysterious phenomenon, “…some meteorites contains metals that are not just metals. I believe that some of these meteorites may have been alien probes or artifacts floating through space. The condition that makes them appear as rocks may just be age. You see, I believe probes are solid, not hollow objects. Solid objects would withstand the harshest of conditions in space. Such objects will contain super micro technology. Tech that is a thousand times smaller than a grain of sand.

“I believe something, maybe the electricity in the box containing it, recharged or awoke the fragment of the probe. Then it released some of the tiny micro robots by opening the glass to free them. But I am concerned…If this theory is correct…then they are lose in the Urals with a definite objective of unknown consequences.”

Waring also points out, “Also the twin brother of the Chelyabinsk meteorite flew near the Earth recently, perhaps it was responsible.”

One thing we do know for sure is that…

Previously…
• Navy pilot who filmed USS Nimitz UFO encounter breaks his silence after 15 years
• Top researchers claim U.S. military is covering up their own super advanced aircraft by making people believe it is a UFO
• Mysterious hovering orbs over Mesa have many believing they spotted a glowing UFO
• UFO seen by 100+ people hovering in the California sky for five minutes sparks alien concerns
• A stationary UFO recorded in the South Carolina sky sparks secret government surveillance theory
• Former head of MI6, who’s allegedly part of a secret global conspiracy on UFOs, says he believes aliens do exist
• UFO expert claims ISS video is ‘100% proof’ NASA, Russia know aliens visit the space station
• Bug expert declares there are insects on Mars and then suddenly deletes research after backlash
• UFO expert claims to have video proof of a fleet of alien spaceships passing by our moon
• 5 Navy veterans and new anonymous source who witnessed the USS Nimitz UFO incident come forward to reveal what they saw
• Retired Air Force Major says a space alien was shot and killed at a base in 1978, government covered it up
• US Navy pilot David Fravor who claims to have witnessed a UFO says the tapes of the encounter have disappeared
• Eyewitnesses spot identical fleet of UFOs in the sky over Utah and North Carolina in the same day
• UFO expert says he has ‘100% proof’ that aliens currently live in a ‘city’ on our moon
• Red triangular craft recorded hovering in the Texas sky is perhaps the ‘clearest UFO footage’ ever
• Top Gun Navy pilot describes his incredible UFO encounter on ‘The Joe Rogan Experience’
• A strange ‘fleet’ of 14 glowing UFOs was spotted and caught on camera off the coast of North Carolina