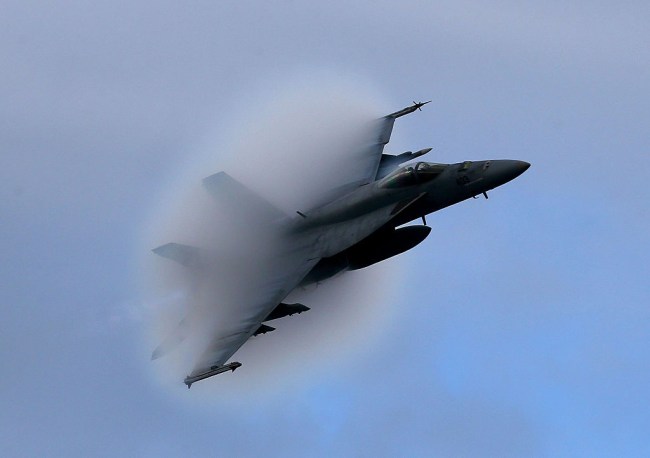 We still don’t know everything about the USS Nimitz UFO incident from November 14, 2004, where U.S. Navy pilots witnessed an aircraft that displayed otherworldly capabilities in acceleration and maneuverability that seemingly broke the laws of physics. There have been a few of the Navy pilots involved in the UFO encounter who have gone public with their accounts of the bizarre confrontation with the unexplained aircraft. Now, the Navy pilot who actually filmed the UFO is breaking his 15-year silence to tell the world what he saw on that fateful day.

On November 14, 2004, six Navy F/A-18 Super Hornet fighter jets and an E-2C Hawkeye plane launched off the USS Nimitz supercarrier that was in the Pacific Ocean, approximately 100 miles off the coast of San Diego. The pilots said that the aircraft was the shape of a Tic Tac and about 46-feet-long. Once the Navy jet fighters approached the undesignated aircraft, the UFO was seen on radar dropping from the altitude of 28,000-feet to 50 feet above the Pacific Ocean in an unworldly 0.78 seconds. Operations Specialist Senior Chief Kevin Day, who was stationed on the Ticonderoga-class guided-missile cruiser USS Princeton, said the UFO flew at an unbelievable speed of 24,000 MPH, yet did not make any sonic booms.

Some of the pilots and Navy members have come forward to tell their side of the story about the UFO encounter. Most notably has been then Squadron Commander David Fravor, who made headlines in October when he did a Joe Rogan Experience interview. The Top Gun pilot and commanding officer of the Black Aces said he saw a “white Tic Tac-looking object just above the surface of the water pointing north/south, and it’s going north south east west just radically moving front back left right at will.”

“So I start driving around, and it’s still doing its forward back left, right. It’s still pointing north-south we get to about the 12 o’clock position. Then the UFO simply vanished,” Fravor said. The UFO “just literally went ‘poof.’”

RELATED: Top Researchers Claim US Military Is Covering Up Their Own Super Advanced Aircraft By Making People Believe It Is A UFO

In November, five U.S. Navy veterans from the Nimitz Carrier Strike Group that made the extraordinary UFO sighting went public with what they saw on that day. Gary Voorhis, Kevin Day, Ryan Weigelt, Jason Turner, and P.J. Hughes all witnessed the USS Nimitz UFO incident in some capacity and revealed that they saw 15 years ago in the Pacific Ocean.

Now, the Navy pilot who actually took the infamous video of the UFO from the infrared camera on the left wing of his F/A-18 Super Hornet is ready to explain what he saw that day. Pilot Chad Underwood, who recorded the UFO footage, gave an interview to New York Magazine and said that the Tic Tac UFO broke the laws of physics, which is enough proof of aliens for many conspiracy theorists.

During the UFO encounter, that initially began as a flight-training exercise, Underwood said Fravor was “essentially my boss, my commanding officer.” While he didn’t actually see the unidentified flying object with his own eyes, he did “see” it on the plane’s FLIRAdvanced Targeting Forward Looking Infrared (ATFLIR), “an optical electric- and thermal-imaging system that was developed for U.S. Navy pilots by Raytheon.”

At about 20 miles away from the Unidentified Aerial Phenomena (UAP), which is within range for ATFLIR but not for a visible sighting, which Underwood said only happens within five miles.

“I was more concerned with tracking it, making sure that the videotape was on so that I could bring something back to the ship so that the intel folks could dissect whatever it is that I captured,” Underwood told Intelligencer.

“The thing that stood out to me the most was how erratic it was behaving,” Underwood continued. “And what I mean by ‘erratic’ is that its changes in altitude, airspeed, and aspect were just unlike things that I’ve ever encountered before flying against other air targets. It was just behaving in ways that aren’t physically normal.

“That’s what caught my eye. Because aircraft, whether they’re manned or unmanned, still have to obey the laws of physics,” Underwood said. “They have to have some source of lift, some source of propulsion. The Tic Tac was not doing that. It was going from like 50,000 feet to, you know, a hundred feet in like seconds, which is not possible.”

“If it was obeying physics like a normal object that you would encounter in the sky — an aircraft, or a cruise missile, or some sort of special project that the government didn’t tell you about — that would have made more sense to me,” the Navy pilot said of a potential conspiracy theories. “The part that drew our attention was how it wasn’t behaving within the normal laws of physics. You’re up there flying, like, ‘Okay. It’s not behaving in a manner that’s predictable or is normal by how flying objects physically move.'”

Another peculiar aspect of the UFO that it did not have a propulsion system from this planet.

“Well, normally, you would see engines emitting a heat plume. This object was not doing that,” Underwood explained. “The video shows a source of heat, but the normal signatures of an exhaust plume were not there. There was no sign of propulsion. You could not see the thing that the ATFLIR pod should pick up 100 percent of the time.”

Underwood shot down ideas that the object they saw was a flock of birds or a weather balloon by saying birds don’t fly at 20,000 feet, and the object wasn’t floating. He also said that he doesn’t believe that it wasn’t a cruise missile or an experimental aircraft because it was “too erratic,” had no wings, and was hovering 50 feet over the water.

The videos of the UFO encounter weren’t released to the public until December of 2017. Former Blink-182 singer Tom DeLonge started up a UFO-hunting organization called the Stars Academy of Arts & Science, which leaked the USS Nimitz UFO incident videos to the world. The US Navy has confirmed that the videos are real.

You can read the entire interview over at NYMag.