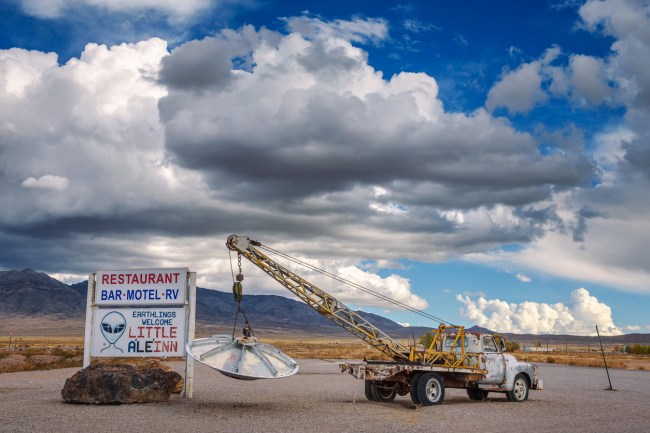 There have been conspiracy theories that the U.S. government has known about UFOs for decades and it is keeping secrets about aliens away from the public. But the speculation that the government is hiding UFOs reached a fever pitch this year when the “Storm Area 51” Facebook event went viral. A new poll shows how much the American public distrusts the government when it comes to information about UFOs.

And it’s hard to argue against those Americans who don’t believe that their government is not entirely truthful with them in regards to UFOs. The U.S. Navy has acknowledged that there has been a high number of unexplained sightings of unidentified flying objects near Navy strike groups and other critical military facilities.

The U.S. Navy urged people to report any UFO sightings, but they also said that they would not release any information to the public that they collect on the unidentified aircraft.

Rep. Mark Walker of North Carolina, the ranking member of the Intelligence and Counterrorism subcommittee as well as top Republican on the House Homeland Security Committee, accused the U.S. Navy of withholding information about unidentified aircraft last week.

Walker is “discouraged by the Navy’s seeming unwillingness to provide his committee with more data about the so-called unidentified aerial phenomena.” Walker said the unidentified aircraft could pose a threat to U.S. forces or territory.

“While I am encouraged the Under Secretary of the Navy confirmed that UAP encounters are fully investigated, there is frustration with the lack of answers to specific questions about the threat that superior aircraft flying in United States airspace may pose,” Walker told Politico.

The Gallup poll also found that Americans are not totally buying into aliens coming to our planet. The survey found that “60% are skeptical” of UFO sightings and believe that “all UFO sightings can be explained by human activity or natural phenomenon.”

At 41%, people from Western states are the region in the United States most likely to believe “some UFOs are alien spacecraft.” At 39%, the age range of 18 to 29 is the group who most likely believe in aliens. The survey found that 27% of college graduates believe in extraterrestrial life as opposed to 37% of those without a college degree.

It didn’t help the government’s reputation when the FBI showed up at the door of Matthew Roberts, the creator of the “Storm Area 51, They Can’t Stop All of Us” Facebook event.

According to Gallup, UFO sightings are higher than surveys in previous years. Polls from 1978 and 1987 had a low of 9% who said they saw a UFO and in 2019, 16% of Americans claim they have seen a UFO.