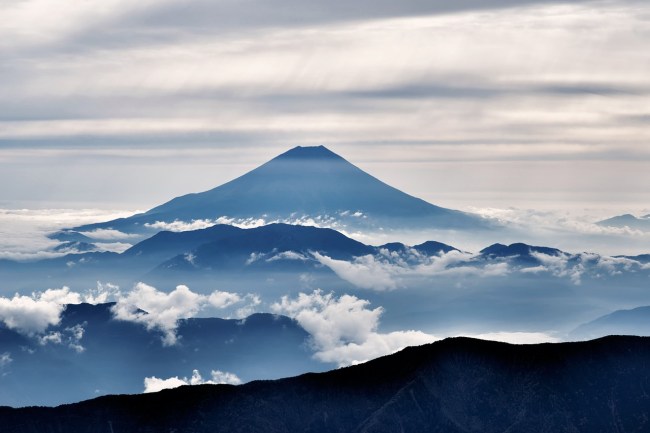 An alien-hunter discovered an unidentified flying object crossing over the top of an erupting volcano when watching live camera video. Footage from the active Popocatépetl Volcano in Mexico appears to show a UFO gliding over a plume of smoke.

On August 19, live camera footage of the active Popocatépetl Volcano shows a white disc-shaped object soar near the mouth of the volcano. Alien-hunter Scott Waring shared the video with what could be a UFO.

The object does not appear to be an airplane because of its round shape and lack of wings. Plus, who would jeopardize their life flying near an erupting volcano? Especially the Popocatépetl Volcano that erupts every 10 to 12 hours.

Waring has shared photos and videos of many other instances of UFOs flying near Popocatépetl Volcano on his alien-hunting website UFO Sightings Daily.

In September of 2010, Waring spotted dark orbs around the Popocatépetl Volcano.

On June 18, 2013, another UFO-hunter spotted seemingly glowing orbs near the Mexican volcano.

In March of 2014, there were more mysterious flying objects seen in the area near the Popocatepetl Volcano, which is 55 miles southeast of Mexico City.

Waring spotted a “dark cigar UFO over the volcano near the clouds” on February 15, 2015.

A “large boomerang-shaped” glowing UFO was seen near the volcano on January 10, 2019.

So are these videos doctored, are the objects drones or military aircraft or do you believe the conspiracy theories that these are indeed UFOs? And if these are indeed alien spacecraft, why are there so many UFO sightings near the Popocatépetl Volcano? Is there an alien base inside the volcano?

You can read more UFO news and conspiracy theories HERE.

RELATED: Strange Orbs Hover Over Kansas City – National Weather Service Has ‘No Explanation’ As To What The UFOs Are