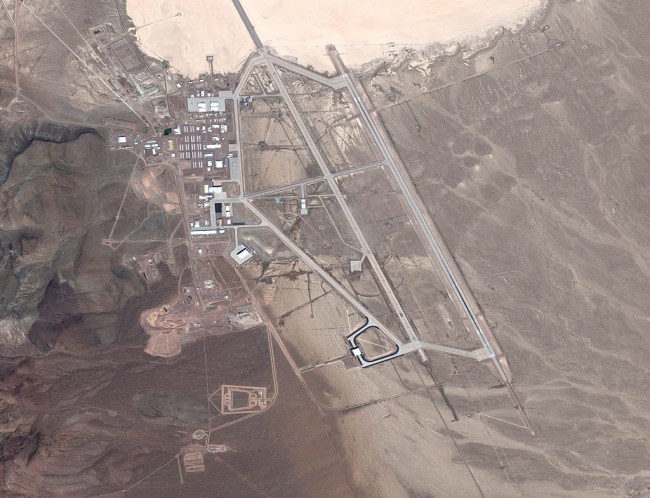 Area 51 is getting a lot of attention because of the “Storm Area 51, They Can’t Stop All of Us” Facebook event that is set to happen on September 20. And if people actually raid the U.S. Air Force base at Area 51, they just might see a UFO. An alien-hunter believes they have discovered a UFO at Area 51 by using Google Earth.

UFO-hunter Scott Waring shared a video where he believes that he found a spaceship at a United States Air Force base at Area 51. According to Waring, there is a circular object over 100-feet-wide seen in a Google Earth image from 2010. Then in a later photo on Google Earth or Google Maps, the UFO-looking object is gone, but a round hanger is where the UFO once was.

In the photo, the circular-shaped structure is connected with tubes to boxes that resemble air conditioning units.

Waring notes that U.S. Air Force bases don’t have round hangars, they’re always straight. “You can see this UFO parked underneath this hanger Waring added: “I was at a strategic air command base, the highest security base for the Air Force, and they don’t have hangers like that.”

“They actually built this whole thing for a disk they already had,” Waring said. “Maybe they flew it over from Area S4 or something.”

In a post on his website UFO Sightings Daily, Waring asks: “So what is this and why are there four different air conditioning units hooked up to this?”

The “Storm Area 51, They Can’t Stop All of Us” Facebook event has 2 million who have said they’re going and 1.5 million who want to go. The event has shifted from a raid of the top-secret military base to a music festival that will take place in Nevada outside of Area 51 from September 20-22.