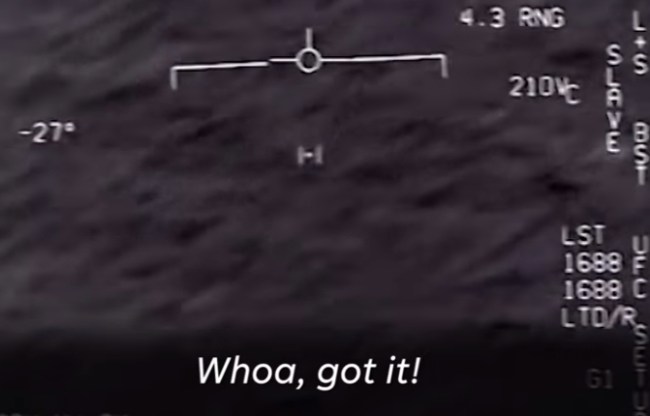 The truth is out there and now the U.S. Navy wants to do more to acquire as much information as they possibly can about UFOs. The U.S. Navy drafted new guidelines for pilots and other employees to report strange encounters with “unidentified aircraft.” Do you want to believe now?

The reason that the U.S. Navy is making this move now is that there have been far too many reports of unexplainable situations involving UFOs and a recent uptick in sightings near Navy strike groups or other critical military facilities, the aircraft have entered military-designated airspace as often as multiple times per month. THERE ARE SO MANY ALIENS FLYING AROUND EARTH THAT THE GOVERNMENT DOESN’T KNOW WHAT IN TARNATION IS GOING ON AND NEEDS PEOPLE TO REPORT ALL OF THE UFO SIGHTINGS.

“There have been a number of reports of unauthorized and/or unidentified aircraft entering various military-controlled ranges and designated airspace in recent years,” the Navy said in a statement. “For safety and security concerns, the Navy and the [U.S. Air Force] takes these reports very seriously and investigates each and every report.”

“The Navy is updating and formalizing the process by which reports of any such suspected incursions can be made to the cognizant authorities,” the statement adds. “A new message to the fleet that will detail the steps for reporting is in draft.”

“Right now, we have a situation in which UFOs and UAPs are treated as anomalies to be ignored rather than anomalies to be explored,” said Chris Mellon, a former Pentagon intelligence official and ex-staffer on the Senate Intelligence Committee. “We have systems that exclude that information and dump it.”

“Since 2014, these intrusions have been happening on a regular basis,” Joseph Gradisher, spokesman for the office of the deputy chief of naval operations for information warfare, told The Washington Post. “We want to get to the bottom of this. We need to determine who’s doing it, where it’s coming from and what their intent is. We need to try to find ways to prevent it from happening again.”

You could easily dismiss these sightings as drones, but Navy pilots say drones or any other aircraft they’ve ever seen can’t fly like these UFOs. There have documented encounters with UFOs as well as testimony by pilots such as Cmdr. David Fravor who said he saw a 40-foot-long white Tic Tac-shaped aircraft with no wings hovering over the Pacific Ocean about 140 miles southwest of San Diego on a clear “perfect blue day” in 2004. There was no rotor wash on the water and when he got within a half of a mile away, the aircraft vanished within two seconds.

Fravor and other Navy pilots say that the velocity and quick change of direction was something “not of this world.” At the time, Cmdr. David Fravor was stationed on the USS Nimitz as the commanding officer of Strike Fighter Squadron 41, also known as “The Black Aces.” Fravor served in the U.S. military for 24 years that included five deployments in Iraq, starting with Desert Storm.

In 2015, a U.S. Navy F/A-18 Super Hornet encountered an unidentified flying object off the East Coast.

The Chilean navy declassified and released this 2014 video of a UFO.

In 2007, the Department of Defense started its Advanced Aerospace Threat Identification Program (AATIP), which is a secret program that had the mission to identify what these flying phenomenons were. Luis Elizondo is the former head of the Pentagon’s Advanced Aerospace Threat Identification Program that had a reported budget of $25 million for research to try to logically explain these phenomena.

He said the program collected tons of data to understand what these flying objects were because they didn’t match anything seen on Earth such as enemy planes, missiles or drones. These aircraft didn’t have any “obvious forms of propulsion, extreme maneuverability beyond the healthy G-forces of a human or anything biological, hypersonic velocities, low observability, positive lift, seemingly defy the laws of aerodynamics.”

Elizondo said, “If I came to you and said, ‘There are these things that can fly over our country with impunity, defying the laws of physics, and within moments could deploy a nuclear device at will,’ that would be a matter of national security.” Elizondo added, “There is very compelling evidence that we may not be alone. Whatever that means.” The Advanced Aerospace Threat Identification Program closed down in 2012 when the congressional earmark ran out. Somebody go see if Randy Quaid is still alive, we’re going to need every viable pilot in the air when the alien invasion comes.