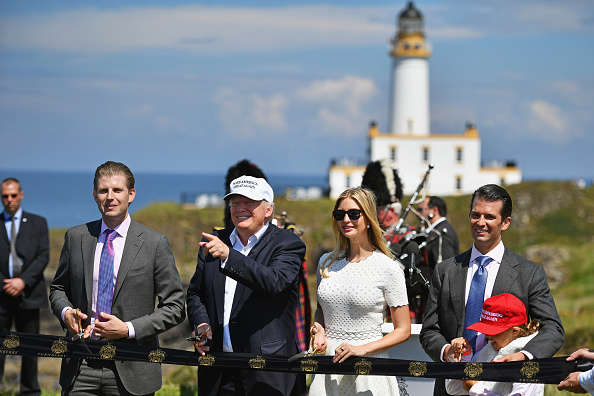 The Turnberry golf course in Ayrshire, Scotland is known for spectacular coastal views, an iconic lighthouse, and its rich history, which includes being a military airfield in World War I and World War II. But a few weeks ago it wasn’t the scenic views that awed visitors at the Trump-owned property, instead it was strange, glowing lights in the sky over the golf course that many claim to be UFOs.

A photo of four odd lights over the golf course were captured on August 16 around 8 pm local time. The photographer captured the possible UFO sighting from the balcony of their hotel room at the luxury resort. The peculiar, blurry bright lights were seen in the sky above the Scottish flag on the course.

“My niece was at Trump Turnberry golf course and took a picture of the golf course from the balcony of her room on august 16, 2018 at 7:56 pm Scotland time,” a person told UFO Stalker. “She emailed the picture because I like to play golf, and when I looked at it closely I saw 4 strange disc shaped objected in the background which she said she had not noticed when taking the picture. Can you help me identify these UFOs?”

A golf fan shared a picture of the mysterious objects, seen in the sky above a Scottish flag at Trump's Turnberry club in Ayshire.https://t.co/CUN34yzBfJ pic.twitter.com/sdPFX4Oz9X

Some non-believers suggest that the strange things in the sky are merely reflections of lights from inside the room shining in the glass window. But the photographer was said to be outside on the balcony. Others say this is absolutely an unidentified flying object.

Here’s what the area looks like without alien spaceships.

So where does President Donald Trump stand on the existence of UFOs? One White House reporter asked about the top-secret UFO program called the “Aerospace Threat Identification” (AATIP) that cost taxpayers $22 million. The question was asked to White House Press Secretary Sarah Sanders back in December of 2017.

DOES THE PRESIDENT BELIEVE IN THE EXISTENCE OF UFOS?pic.twitter.com/ItVhybnRU8

A little history about Turnberry, the golf course was built in 1906 and was designed by Willie Fernie. The property was used as an airbase during World War I and there was even an airstrip built on it, which still exists today. The Turnberry Hotel was used as a military hospital during the Great War.

The grounds were also used as a training facility for the Royal Air Force in World War II. There are said to be as many as 200 military members who died at the hospital during the two wars. A memorial for fallen airmen constructed overlooking the 12th green.

Turnberry was the scene of the memorable 1977 battle between Tom Watson and Jack Nicklaus named the “Duel in the Sun.” Turnberry has hosted the Open Championship four times, with the most recent in 2009.

Donald Trump purchased the golf course and hotel in April of 2014 for $60 million and was renamed to “Trump Turnberry” in June of 2014. The Trump Organization invested $200 million to renovate the course.

According to a ranking by 2016 ranking by Golf Digest, Turnberry is the 22nd best golf course in the world.

Bleacher Report named Turnberry the 19th best golf course in the world in 2017.