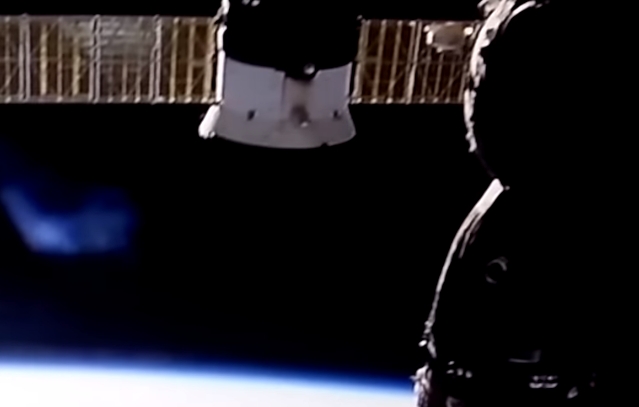 Oh look! A massive glowing blueish, whiteish object is hovering over Earth. No big deal. Right? Wrong. Have you never seen Independence Day and what the aliens did to the White House? The most frightening aspect of this potential UFO sighting is that NASA cut the feed from the International Space Station as soon as the huge structure came into focus. What are they hiding from us?

An unidentified flying object was seen floating in space as cameras from the ISS caught a glimpse of the beautifully terrifying phenomenon over the planet. The video, which as posted to YouTube on November 4th, exposes a glowing object seemingly covered in blue and white gases. Soon after the UFO comes into the International Space Station’s camera viewpoint the feed is cut. “The High Definition Earth Viewing experiment is either switching cameras, or we are experiencing a temporary loss of signal with the International Space Station,” the video says.

Signals from space can accidentally fail, that’s to be expected, but right when this gigantic alien spacecraft swoops into the picture? Not buying it. Especially since NASA has cut the feed when similar unexplainable structures have entered the video.

On April 19, 2017, a white-colored cylinder with a hint of blue was seen from the International Space Station’s feed.

Then on September 30, 2016, another strange blue/white gas-like object was spotted in the ISS livestream and once again NASA cut the feed after the object appeared.

There was this sighting of a UFO on November 16, 2016, where NASA dropped the feed right as the white object races by (Watch at a very slow speed around the six-second mark).

There is this YouTube video with over 6.2 million views from 2014 showing an alleged UFO and the subsequent NASA feed “going down.”

You can check out the live look at Earth from the International Space Station as part of the High Definition Earth Viewing (HDEV) experiment, unless NASA cuts the feed because a UFO soars into the video.

So why does the NASA feed keep “cutting out” at the exact moment that an unidentified flying object appears? I for one welcome our new alien overlords.