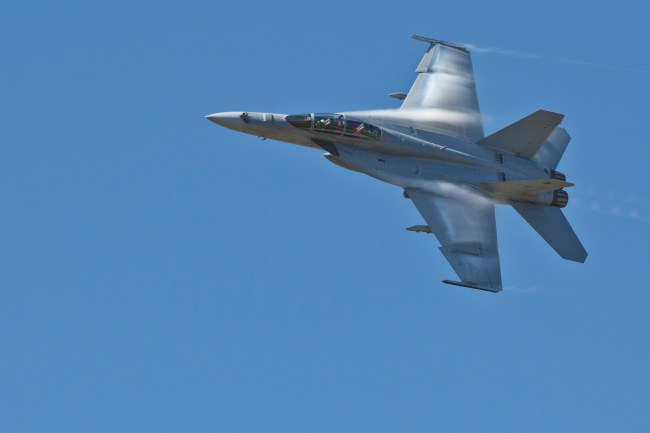 On November 14, 2004, about 60 miles off the coast of California near San Diego, Commander David Fravor witnesses something that could be from out of this world. While investigating an unidentified flying object over the Pacific Ocean, Fravor saw an aircraft that had incredible capabilities. Fravor gave eye-opening details about his UFO encounter on the Joe Rogan Experience podcast.

David Fravor served 24 years in the military, 18 of which he was a Navy pilot. He went to Top Gun, was the commanding officer of the VFA-41 Black Aces, and had deployments in Iraq that began during Operation Desert Storm. Because of his impressive credentials and because of the video evidence, his UFO story is one that needs to be taken seriously.

Commander David Fravor was flying an F/A-18 Super Hornet off the coast of San Diego when he encountered an unidentified aerial phenomenon (UAP). The United States government allowed the 2004 Nimitz incident footage to be available to the public release.

Fravor was pilots of the Nimitz Carrier Strike Group in 2004, and he left the ship around noon or 1 PM. The F/A-18 Super Hornet he was flying was completely unarmed. Fravor was originally supposed to do a training exercise, but it was canceled so that Fravor’s jet fighter and another plane could investigate an unidentified flying object. “We have no idea what we’re intercepting,” Fravor said.

Then the controller explains the backstory about these unidentified flying objects. “Hey sir, we’ve seen these objects, for two weeks they’ve been for coming down. We need you to go investigate, we want to know what these are.”

“We’re off the coast of Mexico, real-world vector, we have no idea what we’re going to look at, probably a drug runner,” Fravor speculated. “Cause you get the drug runners going up and down the coast.”

The weather couldn’t have been better and the visibility was ideal. “The water was perfectly calm, no whitecaps, it’s literally a perfect San Diego, California day. And we see white water.”

Fravor said the disruption in the water was “about the size of a 737, it actually kind of has the shape of a cross, and it’s pointing to the east.” So as we’re looking at it, cause that kind of draws our eyes,” Fravor said.

The pilot in the other plane says to Fravor: “Hey skipper, do you…?” Fravor said, “That’s about all he gets out of his mouth.” Fravor asked, “Dude, you see that? What is that thing?”

“What we see this white Tic Tac-looking object just above the surface of the water pointing north/south, and it’s going north south east west just radically moving front back left right at will,” Fravor said of the UFO. “And it’s moving around the disturbance, the white water that we see.”

“It’s about 40-feet-long, and the way I estimate that is, I mean, I’ve got a lot of time fighting other airplanes, it’s about the size of a hornet,” Fravor tells Joe Rogan.

“This is with our eyes, not sensors. So we’re looking down at this thing, and first thing I think is a helicopter,” Fravor explained. “Because helicopters typically stay below 200 feet when they’re out there. We’re pretty far away from the ship for a helicopter for one of ours.”

“So what is it? So the first thing you look for is rotor wash, you know, if you watch any TV show, that starts kicking the water up, you can see that it’s really easy to see from the air,” Commander Fravor added. “So we’re like there’s no rotor wash, a matter of fact, we don’t see any rotors. We don’t see a tail rotor.”

“I’m at 20,000 feet, and it’s right down on the surface of the right off our right side,” Fravor said of his proximity to the UFO. “So I’m probably maybe a couple miles lateral and 20,000 feet. We’re just watching it move around.”

“The other pilot said they are going to stay up here and I’m like, ‘that’s perfect,’ Fravor told Rogan. “So now what can we get some separation, and we’ll get it from different views and the other airplane will a kind of a God’s eye view of everything that’s going on as I go down and check this thing out.”

“So I start driving around, and it’s still doing its forward back left, right. It’s still pointing north-south we get to about the 12 o’clock position. Then the UFO simply vanished. Fravor said the UFO “just literally went ‘poof.'”

“I call the other airplane, and I said, ‘Hey you guys, you guys see that thing out there, like it’s gone?’ And they responded, “We don’t see it all. It’s gone.”

“So we don’t see it. We’re looking at the same time. I say, ‘Hey, let’s turn around and let’s go back to see what was in the water.’ You know, there was nothing there. There’s no white water. Nothing. It’s just blue.”

“So we turn back around now we’re heading back out towards the east. We start heading back in, and the controller on the Princeton tells me, ‘Sir, you’re not going to believe this, but that thing is back at your cat point.’ That was our original point where we were going to hold 40 miles south of the ship. So this thing is went from wherever we were at to know about 60 miles in, you know, maybe 30 or 40 seconds.”

“I’m going to be able to see this thing turn into a little dot as it goes off into the horizon for probably a minute,” Fravor said on the podcast. “The thing that we saw disappeared in a second, just gone. And that’s from two different angles, remember the other airplane is at 8,000 feet above me because we get close to about 12,000 feet.”

“We know how big the field of view is, but for something to leave the field of view that fast while just hovering is pretty fast,” Fravor continued. “I mean it just it’s like out of here like nothing that we have now.”

“So let’s just use F-22 Raptor. That’s probably the best airplane in the world right now performance-wise. It can’t take off like that. Especially if it’s hovering,” Fravor added. “I mean you’re talking something that’s just sitting in space in the wind and then it just all of a sudden accelerates. Airplanes don’t work that way.”

Fravor pointed out that the thermal camera locked onto this object, and there was no hot exhaust coming from the aircraft, something that would happen with a jet.

Also on this episode of the Joe Rogan Experience was Jeremy Corbell, the documentary filmmaker who made Bob Lazar: Area 51 & Flying Saucers. This documentary explored the intriguing claims of Bob Lazar, a man who says he worked for the U.S. government at Area 51, where he attempted to reverse-engineer an alien spaceship.

Fravor said he knows about 60 to 70 pilots who have seen UFOs while flying. Fravor brings up two other prominent UFO videos taken by U.S. military planes. There is the Go Fast video from 2015 off the East Coast. A U.S. Navy F/A-18 Super Hornet using the Raytheon-made Advanced Targeting Forward-Looking Infrared (ATFLIR), one of the most advanced sensor tracking devices available, spotted some aircraft with alien capabilities.

There was also the Gimbal video, which was footage of an unidentified aerial phenomenon (UAP).

Fravor released new information about the Gimbal video from 2015. While the ATFLIR focuses in on one UFO, there were actually many more aircraft. “So the pod can only look at one thing, so he designates that as his primary target. The radar is still seeing everything else.”

“I was talking to one of the other pilots,” Fravor revealed. “He said there’s actually when you see the radar video, there almost looks like a formation in front like five smaller ones that are moving in front of it and then they turn so like a formation these things turns and starts going the other way and then the while they’re filming the gimbal maybe that’s kind of the comms when you hear, ‘Dude. Holy cow. Look, they’re all over.'”

“There’s a whole fleet of them,” the pilot says in the Gimbal video.

The videos were uploaded to YouTube by the To The Stars Academy, which is the UFO and extraterrestrial life research organization that was started by former Blink-182 singer Tom DeLonge.

Joe Rogan brought up another UFO video where a Mexican air force pilot spotted something flying in the air, very similar to what Fravor said he witnessed.

“Where are these things from? China, Russia, someplace else? I don’t know. But its a capability that we do not possess to my knowledge.”

Fravor said that he has recently talked with “high-level government officials” in Washington, D.C., on two occasions about his UAP encounter.