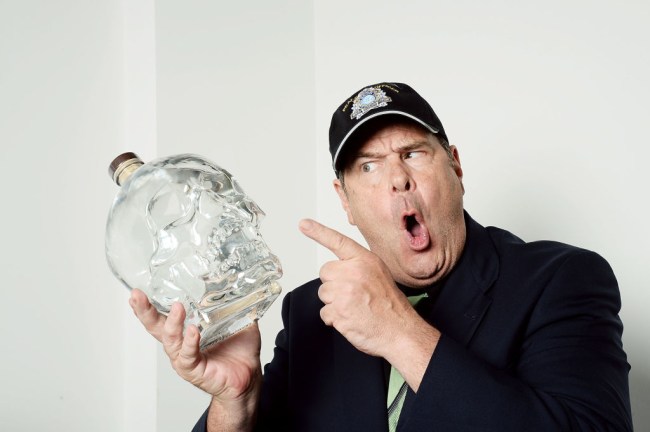 Dan Aykroyd appeared on The Joe Rogan Experience podcast and gave an extremely fascinating interview. They discussed some engaging topics such as Dan Aykroyd talking about the time he slept with a ghost, the upcoming Ghostbusters movie, UFOs, aliens and Bigfoot.

Whether you call it Bigfoot, Sasquatch, the Yeti or the Abominable Snowman, Dan Aykroyd believes there is a giant ape-like creature menacing people in North America. Aykroyd said that he “100%” believes in Bigfoot.

Rogan wasn’t entirely buying into the Bigfoot myth and instead said that people saw a creature called the “gigantopithecus,” which is a humungous primate that stood as tall as 10-feet and weighed 1,200 pounds. As a comparison, most gorillas only weigh 400 pounds. It was so large that the gigantopithecus could not climb trees and it walked on its hind legs.

Rogan and Aykroyd agree that the infamous Patterson–Gimlin film from 1967 of an alleged Bigfoot in Northern California is fake.

Joe Rogan and Aykroyd discuss aliens and UFOs. Aykroyd argues that extraterrestrial life is real and is provable by several events.

Dan Aykroyd declared: “I think at this point, we can accept that these ships are real, that they’re advanced. There’s just so much footage, so many reports, so many landing sites. I think we accept these beings are real. There are many different species. Some are benevolent. Some are malevolent.”

Aykroyd references Barney and Betty Hill, a New Hampshire couple who claim they were abducted by aliens from September 19 to September 20, 1961. The Hill’s allege that the aliens from the Zeta Reticuli star system. In July of 2011, the New Hampshire Division of Historical Resources erected a plaque as a tribute to where the alien spacecraft reportedly first landed.

The legendary comic actor then referenced the Marfa lights, a phenomenon in Marfa, Texas, where there are unexplained lights flickering. Some speculate that the lights are from car lights, while others believe the shiny lights are a mirage caused by steep temperature variations.

Aykroyd said he believed the Allagash Abduction actually happened. In 1976, brothers Jim Weiner and Jack Weiner with friends Charles Foltz and Charles Rak were allegedly camping in Allagash, Maine. All four boys claim they were abducted by four-fingered aliens with almond-shaped eyes and languid limbs. They allege they were taken on a circular UFO and were probed.

Akyroyd references the 1973 Pascagoula Abduction, where co-workers Charles Hickson and Calvin Parker claim they were abducted by aliens while fishing near Pascagoula, Mississippi. Hickson, 42, and Parker. 19, say that three extraterrestrial beings took them aboard a 40-foot oval-shaped spaceship. The men were paralyzed but still conscious as the aliens examined them on the UFO.

The Phoenix Lights was a mass UFO sighting over Arizona and Nevada where thousands of people witnessed bright lights in the air on March 13, 1997. The lights were in a triangular formation that hovered in the skies for a distance of approximately 300 miles.

Aykroyd is exceptionally well-versed in UFO sightings and rattles off several more people who have claimed to have had extraterrestrial encounters. Joe Rogan was very skeptical of Dan’s examples. The podcast host argued that many of the people who claim to have seen UFOs suffer from schizophrenia or they are people looking for attention or they actually saw something that was of this world and not a spaceship from another galaxy.

Rogan does admit that Betty and Barney Hill is an interesting case because there wasn’t a precedent. Rogan also believes Retired Cmdr. David Fravor who spent 18 years as a Navy pilot and claims to have seen a UFO in 2004.

Rogan asked how Dan Akyroyd became so interested in UFOs, and he said his mom saw an unidentified flying object that looked like a “Christmas tree ornament” that was “winking on and off” in different colors. After that UFO sighting, Dan’s mom started collecting any information and news articles related to UFOs.

Aykroyd then revealed that he has seen UFOs four times in his life. The first UFO sighting happened in Martha’s Vineyard when the actor was in his 30s. “I looked up in the sky, and about 100,000 feet up there were two glowing discs flying in formation,” said Aykroyd. “They’re moving man, they’re going from horizon to horizon, 20,000 mph.”

In the early 2000s, Aykroyd saw something that looked like a giant gray air mattress that was 150-feet-long and 50-feet-wide in Montreal, Canada. In broad daylight, Aykroyd said he and friends saw the UFO with bulbs underneath hover.

Dan Aykroyd saw a UFO that was by his farm in Kingston, Ontario. He was riding on his motorcycle when he saw a slow-moving UFO with a blinking red light that he first thought was a helicopter. He stopped the bike, then the UFO stopped, made a right-angle turn and came right at him. Aykroyd put on the lights on his motorcycle because it was a police motorcycle.

“It stops above me and turns on a light,” Aykroyd said of the flying metallic object was 400-feet above him and it didn’t have any helicopter rotors. “It winked the light off and it just drifted off to the field.”

The next day Aykroyd claims the news and radio in upstate New York was talking about a “big pink spiral in the sky” above Eastern Ontario. The media and government said the pink spiral was a Chinese rocket.

Aykroyd then told a story of how Apollo 11 astronaut Neil Armstrong was at a conference in France. A woman who was a former MI6 head was at a cocktail party at the conference that had Armstrong in attendance. The woman claims that she overheard a conversation between Armstrong and an intelligence officer.

“The guy was asking about the moon landing, and Neil said, ‘You know there was a frequency that we switched to and talk about other things that were happening at that time.'”

“When we landed there, on the rim of the crater nearby, there were several ships, and they were large and menacing,” Aykroyd claims that the commander of Apollo 11 said.

Dan also talked about his own Crystal Head Vodka, which is based on the stories about alleged ancient crystal skulls that were reportedly found all over the world. Aykroyd claims that the crystal skulls were proved to be authentic artifacts and Hewlett-Packard engineers did a study of the skulls in the 1960s and determined that they were not made by modern machines.

Other scientists claim that the crystal skulls were manufactured in the mid-19th century and created in Germany.

The folklore of the crystal skulls is that they came from aliens known as “Star Children” who gave the Navajo, Mayan and Aztec civilizations the powerful skulls.

You can watch the entire Joe Rogan Experience interview with Dan Aykroyd below.