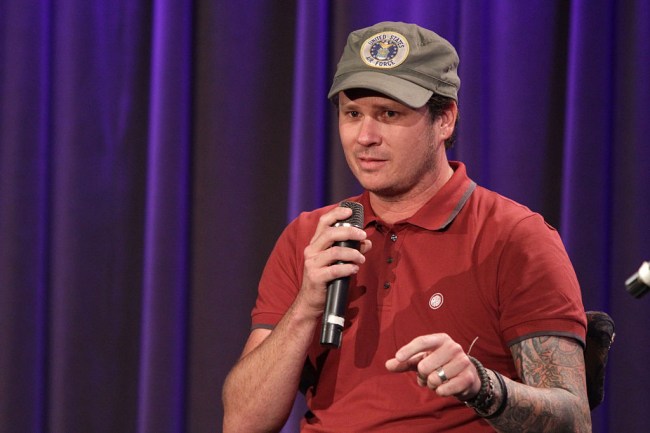 After nearly 15 years, the U.S. Navy finally verified that a viral video that featured UFOs was indeed real. And we can all thank former Blink-182 singer Tom DeLonge.

On November 14, 2004, Ticonderoga-class guided-missile cruiser USS Princeton detected something unusual flying in the waters off the coast of San Diego, California. The crew of the USS Princeton contacted two airborne U.S. Navy Boeing F/A-18E/F Super Hornets from USS Nimitz, who were already in the air flying a combat exercise at that moment.

Princeton’s radar detected that the object had dropped from 28,000-feet to near sea level in less than a second. The Navy pilots looked down towards the Pacific Ocean and saw a 40-foot-long oval object that was slightly above frenzied water, despite the seas being calm all around.

One of the Navy pilots in the F/A-18E/F Super Hornets was Cmdr. David Fravor, the commanding officer of Strike Fighter Squadron 41, also known as “The Black Aces.” Fravor served in the U.S. military for 24 years, which included five deployments in Iraq.

Fravor saw a white Tic Tac-shaped aircraft with no wings hovering over the Pacific Ocean about 140 miles southwest of San Diego on a clear “perfect blue day.” He said that there was no rotor wash on the water and when he got within a half of a mile away, the aircraft vanished within two seconds. Fravor and other Navy pilots who encountered the unbelievable object say that the velocity and quick change of direction was something “not of this world.”

Video of the encounter with the unidentified flying object and the Navy’s jet fighters was not supposed to be seen by the public. But in December of 2017, Tom DeLonge’s To the Stars Academy of Arts & Science organization released leaked videos of the bewildering UFO sighting. The other two videos shows another U.S. Navy F/A-18 Super Hornet encountering something otherworldly traveling at ridiculous speeds on the East Coast in 2015.

To The Stars Academy of Arts & Science is a “revolutionary collaboration between academia, industry and pop culture to advance society’s understanding of scientific phenomena and its technological implications.”

“I think disclosure already occurred. I don’t think necessarily disclosure is an event, I think it’s a process and I think that process began.” Watch or read the transcription of an official presentation on the history of AATIP: what it is, what it isn’t and where it is today up on our blog. dpo.ToTheStarsAcademy.com/blog

On Tuesday, the U.S. Navy finally admitted that the UFO encounter seen in the videos was real and that there are indeed UFOs out there. So the singer from Blink-182 forced the U.S. government to admit that they have seen UFOs and they have no idea what they really are.

“The Navy designates the objects contained in these videos as unidentified aerial phenomena,” Joseph Gradisher, official spokesperson for the Deputy Chief of Naval Operations for Information Warfare, told Black Vault, a website that tracks government secrets. “The Navy has not publicly released characterizations or descriptions, nor released any hypothesis or conclusions, in regard to the objects contained in the referenced videos.”

Gradisher said that “the ‘Unidentified Aerial Phenomena’ terminology is used because it provides the basic descriptor for the sightings/observations of unauthorized/unidentified aircraft/objects that have been observed entering/operating in the airspace of various military-controlled training ranges.”

The Navy didn’t say that there were aliens or extraterrestrial beings, but it doesn’t seem like they know for sure what these incredible aircraft were.

Tom DeLonge has gone in a different direction since his Blink-182 days, nowadays he is an impassioned ufologist. DeLonge executive-produced the History Channel docuseries Unidentified: Inside America’s U.F.O. Investigation.

Sneak peek of my intro on Unidentified. Premieres TONIGHT!!

DeLonge is still playing music and is currently on tour with Angels & Airwaves.