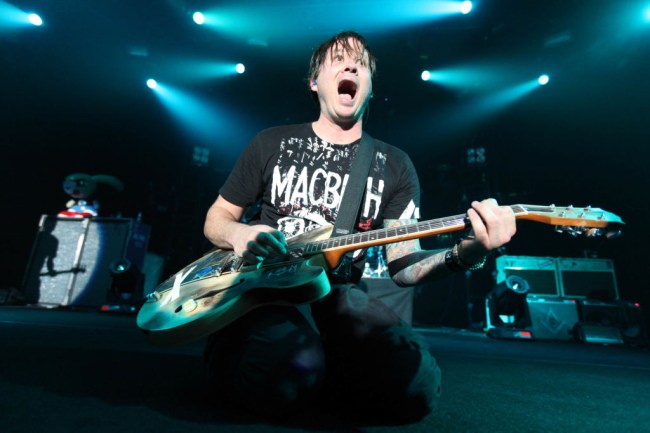 Tom DeLonge gave an interview to NME and talked about a wide range of topics including his departure from Blink-182, if he is crazy, government secrets, his new TV show about UFOs and starting an interplanetary war with aliens by playing Blink-182 music.

In the Tom DeLonge interview, the pop-punk singer discusses the negative reactions to him leaving Blink-182 in 2015, the immensely successful band he helped found in 1992.

“People didn’t really understand why Blink and I had the issue. People didn’t understand the inner-workings of a band,” DeLonge explained. “All they saw was that I’d left the band to go and chase aliens.”

“But at the time I couldn’t even tell my band members who I was meeting and working with – important people who don’t put themselves in the public,” Tom said. “So I had a long period of being groomed to take the shots and to take the bullets. But I don’t care what people think because I know what’s coming; they’re gonna come back and say, ‘Sorry, man, for saying that – what do we do now?’ And I’ll say: ‘My team and I already have a plan for that.’”

“I have to brush aside what other people think of me and not think about it,” DeLonge said of the accusations that he lost his mind. “When I left Blink-182, it was the top trending topic on Twitter a couple times that month – and it was all negative. I developed a really thick skin.”

“Noone really knew what the facts were behind the scenes,” Tom said. “So I was really prepared, going into this, to not really give a sh*t about what people were saying.”

DeLonge started the To The Stars Academy Of Arts & Science, an organization founded in 2017 that is dedicated to studying UFOs and extraterrestrial life. The alien-exposing organization also has an entertainment division that creates movies, TV shows, books, music and art related to finding proof of extraterrestrials and sharing “exciting stories that inspire a new understanding and appreciation for the profound mysteries of our universe.”

Elizondo allegedly was the head of the Advanced Aerospace Threat Identification Program (AATIP), a $25 million program under the umbrella of the Defense Intelligence Agency that attempted to explain unexplained aerial phenomenon seen around the United States. The top-secret Pentagon-funded UFO-hunting program was canceled in 2012. Elizondo is now the Director of Global Security and Special Programs at To The Stars Academy of Arts and Science. You can read more about Elizondo and AATIP HERE.

Blink-182 recently played a concert and made a special dedication to their former bandmate. To celebrate the 20th anniversary of Enema of the State, Blink-182 kicked off their co-headlining tour with Lil Wayne in Hartford, Connecticut. The punk band dedicated Tom’s song Aliens Exist to DeLonge. “This song goes out to Tom, wherever he is,” Blink’s Mark Hoppus announced to the crowd on June 29, 2019.

“It was awesome that they did that,” Tom said of the dedication. “I talk to the guys and we’re all good friends still. We’re like brothers. It’s cool, them doing that. That song that I wrote has a life of its own but it’s really interesting to hear it now, 20 years later, and think about the company that I started.”

Tom was asked which music he would play to aliens to welcome them to Earth — Angels & Airwaves or Blink-182? “Oh my gosh! I would have to play Angels & Airwaves because they would recognize the space-prog sound,” DeLonge proclaimed. “If I played Blink they wouldn’t get the jokes. They would probably get really offended and start an interplanetary war.”

You can read the entire Tom DeLonge interview with NME HERE.

RELATED: President Trump Says He Was Briefed On Navy UFO Sightings And Asked Whether He Believes In UFOs