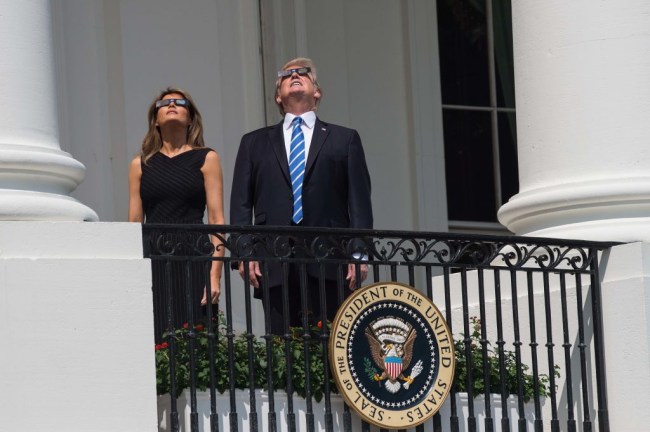 We expect that the President of the United States to have access to all kinds of fascinating secrets and hidden truths. Who really killed JFK? What exactly is Area 51? And are UFOs real? President Donald Trump was asked about whether he believes in UFOs in a recent Good Morning America interview with George Stephanopoulos.

President Trump admitted that he has been briefed by the Pentagon about the recent reports by Navy pilots who definitely said they witnessed aircraft that had otherworldly abilities.

In April, the U.S. Navy introduced new protocols making it possible for military members to report unexplainable situations involving UFOs without any backlash. They did so because there were so many UFO sightings by pilots. However, the Navy said that they will not release any of the information they collect on the UFOs to the public.

“There have been a number of reports of unauthorized and/or unidentified aircraft entering various military-controlled ranges and designated airspace in recent years,” the Navy said in a statement. “For safety and security concerns, the Navy and the [U.S. Air Force] takes these reports very seriously and investigates each and every report.”

Cmdr. David Fravor said he saw a 40-foot-long white Tic Tac-shaped aircraft with no wings hovering over the Pacific Ocean approximately 140 miles southwest of San Diego on a clear “perfect blue day” in 2004. There was no rotor wash on the ocean and when he got within a half of a mile away, the unidentified flying object disappeared within two seconds and the aircraft’s velocity and quick change of direction was something “not of this world.”

President Trump said he wants the Navy pilots to “think whatever they think.” The President added, “I did have one very brief meeting on it. But people are saying they’re seeing UFOs.”

The POTUS gave his opinion on the existence of UFOs, extraterrestrial life and aliens by saying, “Do I believe it? Not particularly.”

“Well I think our great pilots would know, and some of them really see things that are a little bit different than in the past,” President Trump added. “So we’re gonna see. But we’ll watch it and you’re gonna be the first to know.”

In December of 2017, White House press secretary Sarah Sanders was asked if the President believes in the “existence of UFOs” and if he would be interested in having the government funding programs to find out if UFOs are real or not. Sanders, who recently resigned as White House press secretary, said she had not spoken to President Trump about UFOs.

DOES THE PRESIDENT BELIEVE IN THE EXISTENCE OF UFOS?pic.twitter.com/ItVhybnRU8

It was only a few months ago that people said they saw UFOs flying over Trump’s golf course in Ayrshire, Scotland. Last August, locals claim they witnessed strange, glowing lights in the sky over the Turnberry golf course

A golf fan shared a picture of the mysterious objects, seen in the sky above a Scottish flag at Trump's Turnberry club in Ayshire.https://t.co/CUN34yzBfJ pic.twitter.com/sdPFX4Oz9X

RELATED: US Navy Will Not Release Information They Collect On UFOs To The Public