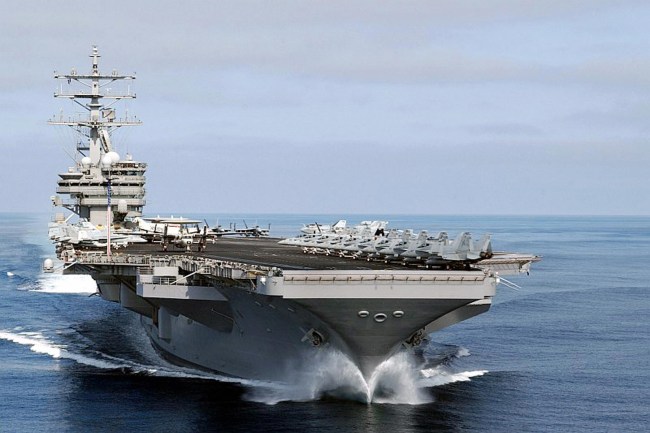 One of the most compelling and credible UFO sightings of all-time was the USS Nimitz UFO incident. The U.S. Navy operation that encountered an unidentified aerial phenomena (UAP) in 2004 off the coast of California has recently been in the headlines because Top Gun Navy pilot Commander David Fravor recently detailed his encounter with a Tic Tac-shaped UFO on the Joe Rogan Experience podcast.

Voorhis was stationed on the USS Princeton, a Ticonderoga-class guided-missile cruiser. He remembers being on the two-week routine training exercise where he saw something on the radar that baffled him. The radar techs on the Princeton were getting “ghost tracks” and “clutter” on the ship’s radars. Voorhis was concerned about the mysterious blips on the radar, but the Princeton was using a new AN/SPY-1B passive radar system, and maybe it was malfunctioning or getting the kinks out. The air control systems were shut down and recalibrated because turning it off and turning it back on is how you fix all electronics apparently.

Voorhis, who was a six-year Navy veteran with two combat tours under his belt, was shocked to discover that the ghost tracks were even “sharper and clearer” after the crew finished the diagnostic check up on the radar. The naval radar registered these objects soaring as high as 80,000-feet in the air and then plummeting to sea level within seconds.

Voorhis revealed that the UFOs went underwater at times, and he knows this because sonar techs picked them up when they were in the ocean. Sonar techs tracked the objects traveling at 500 knots or 575 MPH while underwater.

“Once we finished all the recalibration and brought it back up, the tracks were actually sharper and clearer,” Voorhis says. “Sometimes they’d be at an altitude of 80,000 or 60,000 feet. Other times they’d be around 30,000 feet, going like 100 knots. Their radar cross-sections didn’t match any known aircraft; they were 100 percent red. No squawk, no IFF (Identification Friend or Foe).”

“The reason why I say they’re weird [is] because they were appearing in groups of five to 10 at a time, and they were pretty closely spaced to each other. And there were 28,000 feet going a hundred knots tracking south,” Day said in The Nimitz Encounters documentary.

“Senior Chief Day, his name, was being called over the comms, no bullshit, every two minutes.” said Ryan Weigelt, the former Leading Petty Officer and power plant specialist for the SH-60B “Seahawk” helicopter. “I recall hearing something like a big, real-world scenario was going on, but I just didn’t really understand.”

On November 14, 2004, six Navy Super Hornet fighter jets and an E-2C Hawkeye plane lifted off the USS Nimitz supercarrier to engage in military exercises. Then with the planes in the air, radar picks up the strange UAP once again. Day and the Princeton’s captain agree to send the Hornets to intercept the unexplainable aircraft since they were in the vicinity. The E-2C Hawkeye also detected the bizarre objects that the Princeton picked up.

The Princeton asked what weapons the Hornets were armed with, and they responded that they had no live ordinances because it was a live training exercise with friendlies. This question worried the jet fighter pilots because they started wondering what they’re flying into.

Voorhis attempted to get visual confirmation of the objects by using heavily magnified binoculars; it helped that it was a perfectly clear, blue sky day. “I couldn’t make out details, but they’d just be hovering there, then all of a sudden, in an instant, they’d dart off to another direction and stop again,” Voorhis said. “At night, they’d give off a kind of a phosphorus glow and were a little easier to see than in the day.”

The Super Hornets were getting closer and closer to the target, yet their radars were unable to lock on to the object.

On a clear day and a relatively calm Pacific Ocean, the pilots noticed a disturbance in the water that was the size of a 747 commercial airliner. They ponder that there could be something underneath the water.

Day said that the UFO in pursuit, as well as other UFOs, dropped from the altitude of 28,000-feet to 50 feet above the water in an unworldly 0.78 seconds once the jet fighters approached. Day said the UFOs flew at an unheard of 24,000 MPH. Day points out that if any vehicle from Earth flew at that impossible speed, it would either disintegrate as well as make several sonic booms, he said there were none.

Then Squadron Commander David Fravor sees a much smaller aircraft flying above the water disturbance. The object was in the shape of a Tic Tac or an elongated egg, and about 46-feet-long.

The hovering craft has no wings and is moving left-to-right and back-and-forth erratically, so it wasn’t an airplane. Fravor did not see any rotor wash, so it wasn’t a helicopter.

“So what is it? So the first thing you look for is rotor wash, you know, if you watch any TV show, that starts kicking the water up, you can see that it’s really easy to see from the air,” Commander Fravor said. “So we’re like there’s no rotor wash, as a matter of fact, we don’t see any rotors. We don’t see a tail rotor.”

“I couldn’t make out details, but they’d just be hovering there, then all of a sudden, in an instant, they’d dart off to another direction and stop again,” Voorhis said.

Once the F/A-18 Hornets were able to get as close as a half of a mile to the UAP, the UFO was able to evade the jet fighters by utilizing “an advanced acceleration, aerodynamic, and propulsion capability.”

Lt. Chad Underwood, who was in one of the F/A-18s that flew relatively close to the UFO, was able to capture footage of the encounter by using the state-of-the-art ATFLIR targeting pod. The UFOs had no visible means of propulsion, no uniform heat signature, and no exhaust plume.

The video of the “Anomalous Aerial Vehicle” (AAV) has gone viral since it leaked online by former Blink-182 guitarist Tom DeLonge’s alien-finding organization To The Stars Academy of Arts & Science.

Petty Officer Patrick “PJ” Hughes was on the deck of the USS Nimitz aircraft carrier when the UFO encounter occurred. He had no idea of the UFO incident, but he quickly discovered the UAP situation.

Hughes had a friend who flew on the E-2 Hawkeye plane during the Nimitz UFO incident. The pilot, who wanted to remain anonymous and went by the name “Roger,” allegedly told Hughes that the five crew members of the plane also saw the Tic Tac-shaped UFO.

Once the Hawkeye pilots landed back on the USS Nimitz, Hughes says the E-2 crew were taken to a secure space on the ship. That is where the crew members were allegedly told that “this event did not happen” and were forced to sign non-disclosure agreements [NDA].

On November 14, Hughes secured the hard drive data recorders from the E-2 Hawkeye plane. “We call them bricks, but they contain the software to run the airplane and they also record or can record a lot of the data that the aircrew sees during the flight,” Hughes said in the YouTube video.

Hughes claims that his commanding officer and two unknown individuals approached him. “They were not on the ship earlier, and I didn’t see them come on. I’m not sure how they got there,” Hughes of the two mysterious men.

Hughes’ commanding officers ordered him to handover the E-2 hard drives. “We put them in the bags, he took them, then he and the two anonymous officers left,” Hughes alleges.

Voorhis had a similar experience on the Princeton. “These two guys show up on a helicopter, which wasn’t uncommon, but shortly after they arrived, maybe 20 minutes, I was told by my chain of command to turn over all the data recordings for the AEGIS system,” Voorhis alleges.

“I just knew they were there for a reason, to do something they have to do, and just stay the hell out of their way,” Weigelt backed up the claim. The anonymous men allegedly immediately left the USS Nimitz on a Seahawk helicopter.

Voorhis said there is another FLIR video of the Nimitz UFO encounter, one that is “8-10 minutes long” and “a much clearer video.” “You could see the shape of the ship, you could see it moving,” Voorhis claims. He attempted to make a copy of the video, but it was taken off the secret LAN before he could replicate the footage.

Former Petty Officer 3rd Class Jason Turner on the USS Princeton confirmed the allegations by Voorhis of a 10-minute-long, higher resolution video of the UAP encounter and was able to see details of the UFO.

“It did have some protruding at the bottom of it, I couldn’t tell whether if they were curled back or straight down,” Turner said in the doc. “This thing was going berserk, like making turns like… it was incredible.”

Popular Mechanics spoke to a member of the Nimitz carrier group who witnessed the situation surrounding the UFO sighting in 2004. The witness was an Operations Specialist aboard the USS Princeton at the time.

“I do remember the events of 2004 very well,” the anonymous witness said. “The decision was made to scramble two fighter jets to investigate. From what the pilots described, the movement of the UFO was defying the laws of physics.”

“What really made this incident alarming was when a Blackhawk helicopter landed on our ship and took all our information from the top-secret rooms,” the witness told Popular Mechanics. “We were all pretty shocked, and it was an unspoken rule not to talk about it because we had secret clearances and didn’t want to jeopardize our careers.”

You can read more news about UFOs HERE.

RELATED: Bob Lazar Says FBI Raided His Office To Seize Alien Fuel He Stole From Area 51 But It Was Actually Tied To A Murder Mystery