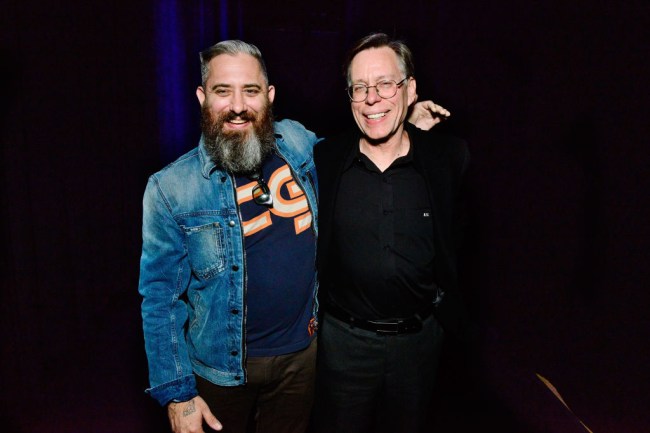 A man claimed to work at Area 51 and not only saw UFOs, but says he worked on alien spacecraft. The man, Bob Lazar, claims he left his position at Area 51, but was able to get his hands on some alien fuel that powered the UFOs. The FBI raided Lazar’s business to recover the alien fuel, according to Lazar, but new findings show the raid was in relation to a murder mystery in Michigan.

Bob Lazar claims to have been a U.S. employee who worked at Area 51 in Nevada, where his job was to reverse-engineer a UFO. Lazar alleges to have worked in a facility of Area 51 called “S-4” that was 15 miles south of Area 51 in the 1980s when he was in his 20s. On May 24, 1989, Lazar told the world about his covert Area 51 job in an interview with investigative reporter George Knapp on Las Vegas TV station KLAS under the alias “Dennis.”

Lazar was back in the headlines this past year after appearing in the documentary Bob Lazar: Area 51 & Flying Saucers. In the documentary by Jeremy Corbell, Lazar explained his experience of working in Area 51 and gave details about the UFO he was working on. Lazar appeared on the Joe Rogan Experience podcast, which Joe Rogan called the interview: “There have been very few podcasts that have freaked me out the way the recent one I did with Bob Lazar and Jeremy Corbell has.”

In 2016, the FBI raided the office of United Nuclear Scientific Equipment and Supplies. Lazar and the documentary frame the raid as an attempt by the U.S. government to seize alien fuel that Lazar allegedly stole from Area 51.

Lazar claims that the UFO that he attempted to reverse-engineer at Area 51 was powered by a mysterious propellant. Lazar claims that the UFOs run on the atomic element 115. The UFO fuel is stable and didn’t decay, according to Lazar. Bob told Joe Rogan that the fuel creates gravity waves to propel the UFO and “I guess you would say its anti-gravity.”

Lazar told Larry King that element 115 is a “superheavy element” and “when it’s exposed to radiation, it produces its own gravitational field—its own antigravitational field, and it’s what’s used to lift and propel the craft.” Corbell chimes in and said, “It can be weaponized.”

Element 115, which is also known as moscovium and ununpentium, is a synthetic chemical element that was first created in 2004 by Russian and American scientists at the Joint Institute for Nuclear Research (JINR) in Dubna, Russia.

Lazar said he was able to smuggle out some element 115 out of Area 51. The documentary and conspiracy theorists suggest that the 2016 FBI raid on Bob’s business was an attempt by the U.S. government to recover the alien fuel. However, a new report by Motherboard alleges that the raid had a far different mission.

According to incident reports obtained by Motherboard, the raid on Lazar’s business was motivated by a murder that happened in Michigan.

Lazar’s United Nuclear Scientific Equipment and Supplies company sells thallium, a highly toxic, soft, gray metal. Thallium is especially dangerous because it is colorless, odorless, and tasteless, plus it can be poisonous to the touch.

Thallium was previously used in rat poisons and insecticides until it was banned in the 1960s. It is also used by electronic manufacturers, glass manufacturers, and the pharmaceutical industry.

On December 22, 2015, Janel Sturzl died because of thallium poisoning. The 31-year-old Michigan woman was poisoned with lethal levels of thallium according to a joint investigation by the Mayo Clinic in Rochester, Minnesota, the Western Upper Peninsula Health Department, the Michigan State Police, and the FBI, according to Michigan Live.

After investigators obtained such warrants from the suspect’s internet search history, Michigan State Police believe that the person who murdered Janel Sturzl purchased the thallium from Lazar’s United Nuclear Scientific Equipment and Supplies.

Authorities obtained a search warrant for United Nuclear Scientific Equipment and Supplies as well as Lazar’s residence to find proof of selling thallium. They searched Lazar’s business but did not search his home. The police report found receipts of thallium sale as well as email communications between Lazar and an unnamed person. Lazar allegedly cooperated with authorities and freely gave them access to all of United Nuclear’s computers, so the search warrant was not served.

Chief Dan DeKorte of the Laingsburg Police Department said that the investigation into United Nuclear “was related to a homicide investigation,” and that he had “no information on Bob, his film, or Area 51.”

Lazar claims that he received the thallium in March of 2017 when a woman provided him with her deceased brother’s “element collection.” Lazar said he would sell the elements, which included thallium, on United Nuclear’s online store

“Thallium is something we never carried before and was just recently donated to us by the family of an element collector that died—so we now had a collection of some unusual materials we’ve never had before,” Lazar said.

Lazar seemed to confirm the raid on a 2017 Reddit thread. A Redditor named “Pseduosmarts” wrote: “Before the rumor mill gets out of control we wanted to set the record straight. We had a customer a few years ago that murdered his wife. FBI, local law enforcement came with a warrant to get our records on him. We provided them the documents and all the info we had on him.” The post included a photo of Bob Lazar holding a paper that read: “Hello Reddit” and the date, 7/20/2017.

Lazar is not named as a suspect in Sturzl’s murder, according to police documents.

You can read incident reports relating to the investigation on Vice.

United Nuclear Scientific Equipment and Supplies has a history of brushes with the law for selling questionable items. In 2003, authorities raided Lazar’s business because there were suspicions by the media that he was selling toxic chemicals, including the radioactive polonium 210, which was the same lethal chemical element that was used to kill former KGB spy Alexander Litvinenko in November of 2006.

That raid led to Lazar and his wife Joy White being “charged with violating the Federal Hazardous Substances Act for shipping restricted chemicals across state lines” in 2006. United Nuclear Scientific Equipment and Supplies pleaded guilty to three criminal counts of introducing into interstate commerce, and aiding and abetting the introduction into interstate commerce, banned hazardous substances.

In 2007, United Nuclear was fined $7,500 for selling chemicals and components that were used to make illegal fireworks.

You can read the entire intriguing article over at Vice.

RELATED: NASA Video From Apollo 15 Mission In 1971 Appears To Show Strange Alien Structures On The Moon