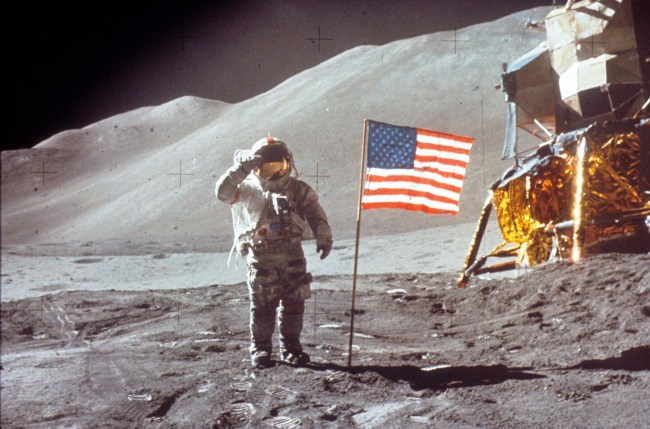 There are many conspiracy theories about Moon landings, some even questioning that it even actually happened. Now a new conspiracy theory has emerged that presents NASA video that appears to show an alien structure on the Moon stemming from the Apollo 15 mission in 1971.

On July 26, 1971, at 9:34 AM EDT, the Apollo 15 crew blasted off from the Kennedy Space Center at Merritt Island, Florida. Commander David Scott and Lunar Module Pilot James Irwin landed near the Béla crater and the Hadley Rille, a V-shaped gorge near the Apennine mountain range.

The Apollo 15 crew spent over 18 hours on the Moon’s surface and explored the desolate lunar landscape in extravehicular activity (EVA) with the Lunar Roving Vehicle. Scott and Irwin collected 170 pounds of surface material and snapped 1,400 photos of the Moon.

UFO-hunter Scott Waring shared a video that shows scientists examining maps of the Moon that were created by the research done during the Apollo 15 mission in 1971. In the archival video, there seems to be an artificial or man-made structure on the surface on the Moon according to an article in UFO Sightings Daily. The alien structure seems to be a wall-like structure or a building with 90-degree angles.

“Look at these long, tall structures,” Waring says in the YouTube video. “They are amazing, aren’t they?”

“The raw footage is 100 percent proof that NASA knew about the existence of aliens way back in 1971,” Waring alleges. “You can see the right angles coming down and across the lunar surface on one.”

“And it sits next to a perfectly-curved area. That is amazing to me,” Waring says of the old video footage. “These buildings are just so obvious. They are absolute 100 percent proof there are structures on Earth’s Moon.”

The alien structure in the archival video was first spotted by Pacitto Dominique and shared on YouTube.

A documentary on the Apollo 15 mission is uploaded on the European Space Agency (ESA) website.

So is this a human lunar base in space or the home of aliens on the Moon? A few weeks ago, Waring shared another conspiracy theory. He shared a video of “proof” that China was using weather manipulation to control a typhoon.

Apollo 15 made the first-ever televised lunar liftoff in 1971.

Here is a documentary on the Apollo 17 mission to the Moon, but there doesn’t seem to be any space bases from that mission.